Review: Even the Wind by Phillip Wilson 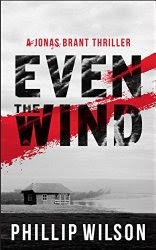 Boston police detective Jonas Brant once was a grunt in Afghanistan, serving the greater good on the front lines. Now he’s on the cusp of a far different but still deadly frontier.

Phillip Wilson was born in 1965 in Glasgow, Scotland, grew up in Canada and moved to Japan in 1996. For almost 20 years, he has had a front row seat to history as an editor at an international news organization. He has served as editor, bureau chief, and trainer on various beats, including technology and renewable energy. When not writing, he is an avid endurance athlete, having competed in running events and open-water ocean swims in Australia, Japan, the U.S. and Canada. His first book is `Even the Wind,' featuring Boston Police Lieutenant Jonas Brant. Phillip lives in Tokyo with his wife and two children. On most winter weekends, he can be found skiing in the Japanese Alps near Nagano.


Phillip Wilson reels in readers like a fisherman patiently setting one hook, then another and another. The murder victim is not what she appears to friends and colleagues. A Russian gangster is ruthless in his ambition to grab a piece of the drug action, but in a ploy that involves equity markets rather than crack and meth. A suspect in the murder dies from a gunshot: suicide or something else? An unexpected manage a trios explains only half the story.

The hero, Jonas Brant, is a physically and psychologically vulnerable cop, with a bullet lodged in his brain and a motherless son to care for along with an irascible father in a home for the aged. His sister was named by a geology-loving mother for a type of shell formation, Marcellus.

Wilson is meticulous with details whether describing real or imagined scenes in Boston or describing the moods of even walk-on characters. A waitress doesn't just bring the food. We get a sense of what the job entails:

"The waitress caught the meaning and mouthed a response. Yes, it was coming and would be there in a moment, she’d seemed to say."

I have only a couple of complaints, which are not critical to the story.

One, the writer explains much more than is necessary.

--` ` Where are you two?’’ Brant asked out of curiosity. -- Asking implies curiosity.

--Schroder sighed as he threw up his hands in despair. -- Sighing and throwing up hands imply despair.

--Good to see she had standards, Brant thought silently to himself. -- One always thinks in silence and to oneself.

Those are but a few examples that slow the narrative.

Two, the denouement is rendered by a killer who holds the hero and his partner at gunpoint. The killer says unconvincingly that the hero "has a right to know" before intending to murder him and his partner. The confession, too conveniently, fills large gaps in the story. This hardly credible scenario has the saving grace of presenting an ingenious and scarily credible motive of the bad guys.

Back to praise, I love a story that not only entertains, but also educates. Even the Wind does just that for anyone curious about genetic manipulation for either good or evil.

Opening quote marks and closing quote marks appear to be different fonts. There are enough grammatical and spelling errors to be noticeable, but not so many as to distract from the story