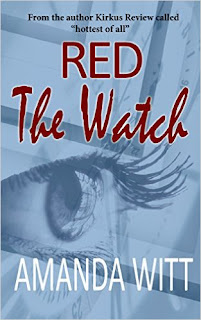 Genre: Science Fiction/Dystopian
Description:
Every element of life in the walled city of Optica is tightly controlled by the ever watchful Wardens. Citizens accused of breaking the rules suffer public humiliation or execution. Red (named for her hair color) is a rebellious teen. Skirting the rules, she tries to learn the true reason for Optica, why she’s considered “different,” and what the mysterious Guardians plan for the citizenry.
Author:
Amanda Witt began writing novels when her teenagers and their friends cornered her and presented her with a wish list that became, eventually, THE RED SERIES.

Her short story "Night Rose" was chosen by international best-selling author Jeffery Deaver for inclusion in the Mystery Writers of America anthology A Hot and Sultry Night for Crime, and singled out as "hottest of all" by Kirkus Reviews and "arresting" by Publishers Weekly.

She is currently at work on a stand-alone thriller. Visit her at her website.

Appraisal:
The world building in this novel was extremely well done. Optica is dark and depressing—very Orwellian. The society is tightly controlled by Wardens who are armed and in most cases devoid of sympathy for the general population. Video cameras constantly observe the citizenry. At night, a searchlight mounted on a high central tower like the eye of Mordor swivels its beam across the streets. The main character, Red, was likeable enough to keep me rooting for her as she lurched from one risky encounter to the next.
I had two issues with the story. The first is personal—there were a lot of named characters, and I found it difficult to keep them straight in my head. I know not every reader is challenged in this manner, but I am.
My other issue was with the way information about the genesis of Optica and the true allegiances of the secondary characters close to Red was unresolved. While the author offered many hints, she kept salient information back, and this teasing technique pulled me out of the story a number of times.
This is first in a four book series, so a certain amount of set up is to be expected, and of course the objective is to encourage the reader to move to the next title. But most of the story takes place in and around Optica, and the novel ends elsewhere with a cliffhanger of enormous proportions, leaving many threads created in Optica hanging and open. I’d have liked more resolution before being moved on to the next part of the story.
Buy now from:            Amazon US     Amazon UK
FYI:
Format/Typo Issues:
Clean copy.
Rating:  **** Four  Stars
Reviewed by: Pete Barber

YaY! We are live again! For the time being. :D