Among the Dead by Stephen A. Kennedy 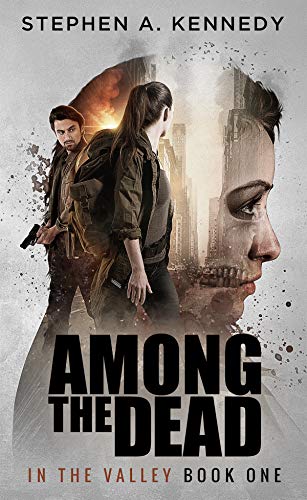 “A pandemic sweeps across the globe. Everything shuts down. Airports, businesses, schools. Cell phone service and electricity soon follow. The virus turns people insane, causing them to attack anything that moves. Armed forces are quickly overrun, and every citizen is in a fight for their life.

Samantha survives the initial onslaught of infected. But now she decides to venture out from upstate New York to find her husband, who was stranded in Los Angeles. Determined to be reunited with her love, she sets out through the hell that the United States has become.

Along the way, she meets Jason, another survivor, who was separated from his wife in Flagstaff, Arizona. They decide to travel together, helping each other reach their spouses. They soon find they’ll have to make difficult decisions in order to survive.

But how long can someone cling to their values and morals in a world that has abandoned such things?”

A native of Kansas, Stephen A. Kennedy has been writing for several years. This appears to be his first book of a planned trilogy. For more, checkout his Facebook page.

I think it would be fair to say that my thoughts and feelings about this book are contradictory and all over the place. It felt like it had a lot of proofing issues, but when I reviewed my notes it hadn’t gone over the limit I’ve set where I’ll start deducting stars from the ranking for that reason, although it came very close to that line. I found that I liked the characters, enjoyed getting to know them, and was pulling for them, curious as to where the story was going to go.

The pandemic at the heart of the story hit close to home, as it might with most potential readers, and yet is enough different from the reality that it isn’t hitting too close. Yet that aspect helped draw me in more than that kind of thing has when I’ve read post-apocalyptic books involving a pandemic in the past.

I hadn’t registered that this was intended to be the first of a trilogy, but didn’t expect the story to come to a clean end for the characters, only a clean ending for this phase of the overall story, which it did. I can’t explain my thinking or any of the details without it being a spoiler, but I can say that the ending of this book hit me wrong. It made it feel like what I thought I knew about one character was a lie. The reaction of the other main character, especially in light of some other significant recent events, seemed illogical. Instead of leaving me wondering what was going to happen in book two I was left wondering if I really wanted to know or still cared enough about the characters to find out.

Borderline with lots of proofing issues, but not quite enough to impact the rating.