Review: The Pineys: My Cousin, the Piney by Tony DiGeroLamo 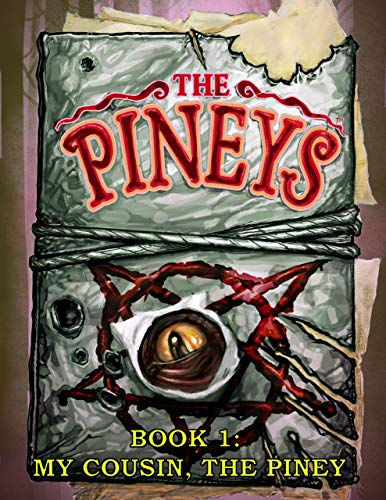 “From the creator of the Jersey Devil comic book comes a story about four cousins cursed by their ancestors, brought together by destiny and trying to keep South Jersey from going to Hell.

In 1732, Mother Leeds gave birth to the infamous Jersey Devil, which has roamed the Pine Barrens ever since.

Or so the story goes…

The truth is, Mother Leeds was a witch and opened the portals to Hell unleashing hundreds of devils into woods. But the villagers next door in Abe’s Hat noticed and formed a secret hunting society to track down the fiends and send them back to the Abyss. Their descendants continue the Hunt in secret to this day.

So grab your pork roll, put on your Piney Power hat and join the hunt, because the Galloway cousins are coming to save you whether you like it or not.”

“Tony DiGerolamo is a New Jersey screenwriter, novelist, comic book writer, game designer and comedian. He is best known for his work on The Simpsons and Bart Simpson comic books. He has also been a joke writer for Politically Incorrect with Bill Maher, a scriptwriter for Space Ghost: Coast to Coast and a blogger for Comedy Central’s Indecision website. You can see his current comics at the Webcomic Factory and Super Frat and his videos at YouTube and Bitchute.”

You can check out Mr. DiGerolamo’s website or his books on Amazon Author Page.

My Cousin, the Piney is sort of a mash-up of Ghostbusters, except with tricky morphing devils, and the bumbling antics of the Keystone Cops. Due to the vengeance of a witch who opened a portal to hell hundreds of years ago in the woodlands around the small township of Abe Hat, The Piney cousins started a secret society to hunt devils and send them back to hell.

Now imagine you are Lewis, a gambler, who pulls off the expressway on the way to Atlantic City to get gas and ended up in Abe Hat. The locals stare at him strangely because no one just stops in Abe Hat unless they are cousins. For all they know he is a devil they haven’t seen before. Things start moving pretty fast and furious with twists and turns up the wazoo. It’s mostly a fun romp until Lewis gets sucked into one of the portals to Hell. Shelly has taken a liking to Lewis and decides to go save him. Now the cousins have to keep the portal open until Shelly brings Lewis back to the earthly plane. All the while the cousins battle the new devils who are taking advantage of the open portal. It’s all a stinkin’ bloody mess!

The ending was quite a surprise, I wasn’t sure how it was all going to come out. If you enjoy demons, devils, witches, ghosts, secret societies with a lot of humor you might enjoy the antics in this story.

My Cousin, the Piney is book 1 in Tony DiGerolamo’s series, The Pineys.

I want to say a small number of proofing issues. The two that bothered me the most, because they threw me out of the story, was when the author got character’s names mixed up. Which caused a star rating loss.