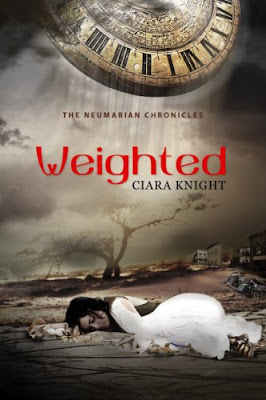 Raeth Arteres, a Neumarian, is a prisoner on board the Queen’s airship. She is about to be interrogated by one of the queen’s henchmen using an experimental neuro-alterer. Raeth doesn’t expect to live to see adulthood. Her only hope is to keep the knowledge of her power from the evil Queen so as not to betray her family or her people.

Ciara Knight is the author of YA novels and speculative fiction. A native of Tampa, Florida, she currently resides in Kennesaw, Georgia where she is working on the third installment of The Neumarian Chronicles series, Balance. When not writing, Knight loves to travel. She’s even landed in a helicopter on an Alaskan glacier.

Weighted is a gripping novella about survival and loyalty. Ciara Knight does a wonderful job whetting the appetites of her readers with this 44-page thriller prequel to The Neumarian Chronicles series. In so doing, the author does an amazing job of developing her characters, especially the evil Queen and her naïve daughter, Princess Semara. Raeth soon learns that Semara may be her only hope for survival, or is she the good cop building trust to uncover Raeth’s biggest secret?