Reprise Review: One Day in the Life of Jason Dean by Ian Ayris 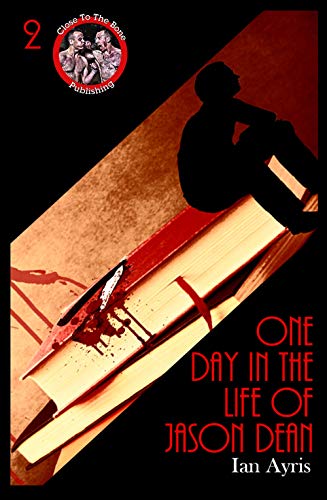 Jason Dean is going to have his worst day ever. First, he has to collect some debts. Then he has to kill a man.

Ian Ayris has had a love of writing since childhood and has had some forty short stories published, most recently a novel, Abide With Me. Ian is currently studying for a degree in English Literature. He lives with his family in Essex in the UK.

This is one of the best stories I’ve ever read. There, I’ve said it. And I’m not taking it back. I’ll explain why…

We wake up very early one morning with Jason, he’s in bed with his wife who loathes him but we’ve no idea why. He tells us he’s going to have a very bad day, in fact Jason must have one of the longest faces in literature. He’s truly unhappy. Whilst having some food and a coffee in perhaps the worst café in the world Jason reveals he’s got to collect some cash for a local hard man, Micky Archer, then kill a guy.

Jason goes to see Micky to find out the names of who has to pay. In an incredible scene, the two hard men argue about Wagner and Shostakovich of all things. It transpires that Jason, despite living on one of the worse estates in the country (which Ayris deftly paints, a perfect backdrop) is extremely well read (although not well schooled which comes over in the narration).

Jason proceeds on his debt appropriation mission with mixed success, including witnessing a suicide. Whilst walking around this hellhole dealing with the locals, the hard man treats us to insights on the classical music he listens to, the books and poetry he’s read, and how they make him feel. Like Sylvia Plath and the parallels she draws to Jason’s life. It’s totally at odds with the person we’re reading about, adds real dimension to Jason’s character, and throws his surroundings into stark contrast. He doesn’t want to be who he is, but Jason feels he has no choice. He doesn’t want to murder a man, but he must. Another brilliantly written scene.

Throughout the story, Jason is also thinking about his daughter, Sophie. Towards the end of the book he reveals why he has such a heavy heart in a truly emotional, heart-wrenching scene. I really wish I could tell you more, but I don’t want to spoil the surprise. It completely caught me out and brought everything to a well thought out conclusion.

The characters, besides Jason, are excellent. I particularly like Micky. Finally Jason’s monologue and the dialogue are both excellent, for example the classical music argument:

I know he’s only kiddin, cos we been mates for years. But it don’t make it no fuckin easier sittin here in his comfortable three bedroomed semi, drinkin tea out of a china cup and listenin to him bangin on about fuckin Wagner, whilst at the same time he’s beratin the fuckin genius of Shostakovich…

‘Nietzsche was right,’ I says, quiet, sort of under me breath.

Micky’s eyes start to bulge. He puts his tea down.

‘What did you say?’ he says, leanin forward, squeezing his eyebrows together.

The pair then proceed to fight over Nietzsche’s interpretation of Wagner - this incredibly rough, violent pair arguing over classical music and philosophy having discussed debt collection and murder.

And back to the beginning. This is a superbly written novella. I can’t find a fault anywhere with it. One of the best stories I’ve read. Ever.

Adult language, some scenes of violence.

Added for Reprise Review: One Day in the Life of Jason Dean by Ian Ayris was a nominee in the Crime Fiction category for B&P 2014 Readers' Choice Awards. Original review ran March 11, 2013.