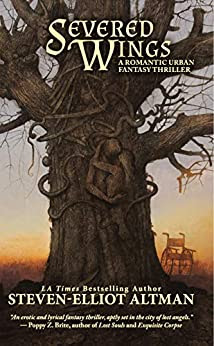 “Brandon Jones, a handsome, hopeful young actor, stands on the verge of fame and fortune—when a car accident shatters his life, bringing his career to a screeching halt. Isolating himself, he cuts off his friends and family, turns to booze for companionship, and withdraws to a small apartment on Sunset Boulevard. Now, the only people he interacts with are a drag queen and a student working her way through college as an escort.

Brandon has nothing to live for…until a startlingly beautiful young couple moves in across the hall. Spying through the peephole in his door, he grows increasingly obsessed with his new neighbors—and the parade of damaged strangers who visit them at all hours.

Then something seemingly impossible happens that convinces him that this mysterious couple can help restore all he lost.

Brandon insinuates himself into their lives, and finds himself on a journey from despair into hope—as an ancient secret from the dawn of time draws him head to head with a terrifying foe, bent on destroying everything he’s now come to love.”

“Steven-Elliot Altman is a bestselling author, screenwriter, graphic novelist and video game designer. Steve's novels include Captain America is Dead, Zen in the Art of Slaying Vampires, Batman: Fear Itself, The Killswitch Review, The Irregulars, and Deprivers. He's also the editor of the critically-acclaimed anthology The Touch, and a contributor to Shadows Over Baker Street, a Hugo Award Winning anthology of Sherlock Holmes Stories. Steve's also the current Vice-Chairman of the steering committee of the Writers Guild of America's Video Game Division.”

Brandon Jones is an up and coming actor on the brink of hitting the big time when a devastating car wreck leaves him paralyzed from the waist down. After a few months of living in his parents’ house he decides he couldn’t properly wallow in his misery living there. With the help of the screen actors’ union and government assistance he finds a handicap adapted studio apartment he can afford at Villa Rosa on Sunset Blvd. His next order of business was to fill the refrigerator, the liquor cabinet, and gather delivery menus. Now he has to extract himself from all friends and family as he contemplates suicide.

The Villa Rose apartments are mostly inhabited by society’s misfits. Down the hall from Brandon lives Ray, a drag queen, he is a quirky character who adds humor and levity to the story to counter Brandon’s dark moods. Bethany lives on a lower level, she is a student working her way through college as an escort. Brandon meets her while doing laundry. They strike up a friendship.

Things get interesting when a mysterious couple, Desmond and Kyra, move in across the hall. The plot takes a turn when Brandon becomes obsessed with Kyra’s beauty and spies on her whenever he catches her in a window. He also notices the strange people who come to visit late at night. Brandon makes an effort to insinuate himself into his newest neighbors lives. Then the dreams start.

Brandon has no idea what he has gotten himself into. But he feels like Kyra can heal his injury so he can walk again, so whatever the price to pay will be worth the risk. Mr. Altman does a great job building his secret world and the descriptions of setting up scenes throughout the book are rich and realistic. The culminating battle on the roof of Villa Rosa was epic. Brandon’s journey from despair to hope and then back to despair again was difficult to read and I had to wonder if he had the inner strength to pull himself through, especially after he had made his peace with death.

Not all sex scenes are behind closed doors. Adult language with several F-bombs.

I was provided an ARC, so I can’t provide a comment on the finished product.