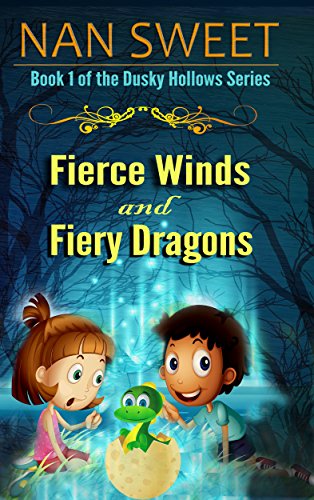 “Ivy and Carrie love their new classroom even if the new teacher is a little strange. When Mrs. Huffity asks for volunteers to care for an egg, Ivy doesn’t budge. She’s had a few scary dreams about that egg and wants nothing to do with it.

But when trouble comes, Ivy defends the egg. In her desire to save the baby that hatches, Ivy is tossed into the middle of an adventure. She discovers more than she ever wanted to know about fierce winds and fiery dragons.”

“About Nan Sweet: I don't eat dragons, fairies, or toadstools, although I will admit to swallowing the occasional gnat. One really couldn't swallow a dragon or fairy without full knowledge. In addition, I write. You'll find my books are full of adventures and well, dragons. Soon I'll be entering a new galaxy with a science fiction adventure. I look forward to seeing you there.”

Fierce Winds and Fiery Dragons is quite an elaborate fantasy tale. Ivy and Carrie are best friends starting fifth grade with a teacher who is new to the school. Mrs. Huffity is strange. Her voice changes to a low gravely sound at times and she says what sounds like a prophecy to the girls. Mrs. Huffity seems to be hiding this colorful egg by assigning kids to take the egg home with them and then bring it back to class the following day. All the kids think the egg is a fake, except Ivy, who has been having bad dreams about the egg. However, when Ivy and Carrie see David, who was assigned to babysit the egg, stuff the egg in his locker for the night, they break into his locker and take the egg for safe keeping.

Both girls are thrown into a fantasy world full of strange creatures. Carrie is captured and thrown into a cage in an underground world whose inhabitants live in darkness. Ivy ends above ground, abandoned after a heroic rescue mission. Then she navigates this strange world trying to find Mrs. Huffity or Carrie, while trying not to get eaten.

This is a unique story that will capture a middle grade student’s interest with an adventure that is exciting, a bit tense, and a bit frightening at times. Fierce Winds and Fiery Dragons also explores familial dynamics and friendships. The journey of these two friends were different, and fun to watch as they grew more confident in their ability to face whatever life throws at them.

The only significant proofing issue I found was the author spelled Barry’s name, Barrie -- one time. Barry is a secondary character so it was a minor detail to me.