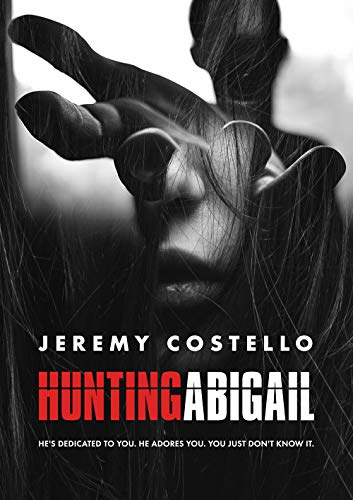 “There is a killer stalking the streets of London, taunting the police and playing God with innocent lives. At ten years old, Abigail Fuller is the only one to have survived coming face-to-face with the monster the headlines are calling the ‘Valentine Killer.’

Almost two decades later and Abigail is one of a small group of survivors from a trans-Indian Ocean plane crash. Stranded on a remote island, strange and unexplainable events begin to roll through the dejected camp while the vast blue horizon shows no signs of a rescue.

Is the island not as deserted as the survivors thought? Or has Abigail's past come hurtling into the present and the predator from her childhood stalks amongst them!”

A native of the UK, Jeremy Costello has several novels he’s written, but Hunting Abigail is the first that he’s releasing for the world to read. Another, Breaking Nathan, a suspense novel, is being prepared for a future release. For more, check out his website.

As the book’s description explains, Hunting Abigail takes place over two periods of time, roughly twenty years apart. Abigail Fuller, a ten-year-old in the first period, is the character common to both periods of time. The story jumps back and forth between these two periods. At first, I found myself getting confused when the book jumped periods and I’m not sure why as when ever a jump was made it was at a chapter break and clearly labeled with a date, so I’m going to say the fault for this wasn’t him (the author) but me. The other thing I found was I kept getting surprised. Several times all through the book, but especially in the first third of it, I found myself surprised at a twist the story took, a twist that made perfect sense in the context of the story, but that I never saw coming. That’s a positive, at least for this genre.

An edge of the seat thriller that kept me guessing, shocking me at the unexpected twists. Had me pulling for the good guys while I tired to figure out who the bad guys actually were. Definitely one that thriller readers should enjoy.

The author uses spelling conventions you’d expect from a native of the UK. So adult language.

The version I reviewed was an advance reader copy and I can’t gauge the final product in this area.