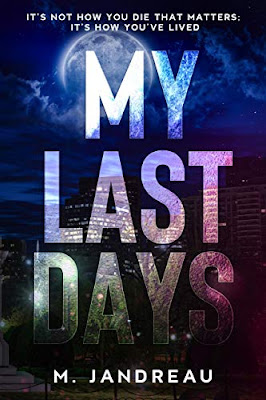 “A life of burnt bridges and bad decisions.

Sometimes, the end of one journey inspires the beginning of another.

I am going to die.

No matter how many times Andy Costello rolled those words around his mouth, the bitter aftertaste of regret lingered on. For his life had not been a journey of happiness, growth and friendship, but of selfishness, thoughtlessness, and worst of all – loneliness.

But on that fated afternoon, high up in a Massachusetts hospital when his terminal diagnosis is declared, Andy’s life does not hit a dead end but an intersection. A crossroad of choices; either be absorbed by self-pity, or make the most of the time he has left. Determined to make amends for his past indiscretions, Andy’s journey of repentance and rediscovery invites old faces he thought he’d never see again, as well as new ones from the most unexpected places.

For it’s not how you die that matters, but how you’ve lived.”

A native of New England and current resident of suburban Boston, this is M. Jandreau’s second book. His first, A Sour Chord was published in 2014. For more, visit Mr Jandreau’s website.

If you knew you were going to die, had a little bit of time left (maybe six months or a year) but not much more, how would you react? What would you do differently than what you’ve been doing or presumably would have continued doing if you hadn’t been blindsided with this news? If you’d been a less than wonderful person, would you try to make amends for those you’d harmed? Would you turn over a new leaf or figure “I’ll be gone, so what I do doesn’t matter?”

Andy, the hero of this story, is told he’s going to die. If you’ve ever come close to death or, like Andy, discover that it is imminent, you reevaluate. If nothing else, your priorities are validated and you do nothing or, more likely, this evaluation causes you to at least tweak your approach to some aspects of life. In Andy’s case, these tweaks are pretty significant.

This is a feel-good story that should have you pulling for Andy to accomplish his newly created bucket list while he still can, hopefully evaluating how you’d react if you were in the same situation, and maybe making a few tweaks yourself. But be prepared for an emotional rollercoaster ride as well.

The version I read was a pre-release copy and presumably had a bit of additional polish added before release. I can’t gauge the book that was actually released in this area.