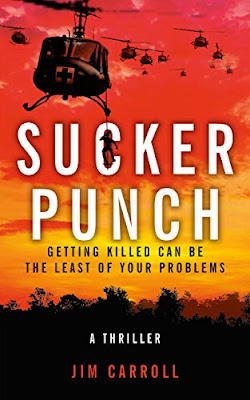 “Johnny Mack wanted to be an airline pilot who flew all over the world, made great money and met lots of girls. At 18 that seemed like a fair trade for a few years in the Army.

Johnny found out too late that in 1971 the Army only needed helicopter pilots. And they only needed them in Vietnam.

After an unfortunate incident involving a General’s daughter, Johnny ‘volunteers’ to go undercover on a Medevac crew suspected of selling Army medicines to the enemy.

Then there is the regular job. Coming into hot landing zones. Loading the dead and wounded. Ignoring the screaming and thrashing about in the back. Holding the helicopter steady as bullets rip through the bird. Cleaning out the blood and gore as part of the regular post flight.

There is no one to trust. Death is coming from every direction.

As life spirals out of his control, Johnny realizes that getting killed may be the least of his problems. His sanity, his soul and everything that he believes himself to be, are in as much danger as his life.”

This is Jim Carroll’s first novel and was inspired by the year he spent in Vietnam “working and sleeping 100 yards from a Medevac Hospital landing pad.”

A solid novel that while a military thriller, also has elements of mystery and romance thrown into the mix. In fact, it felt almost like a memoir at times, in that the author made the things the protagonist was experiencing and feeling seem all too real, especially as the book was starting out which did a good job of drawing me in. It also did a good job at getting me thinking about the cost of war. Intense with a few characters that I really cared about and wanted to see survive relatively unscathed.

My review is based on an advance reader copy. I can’t judge the final product.