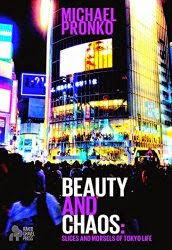 A native of Kansas City, Michael Pronko has lived in Tokyo for fifteen years.

“The largest city in the world teems with chaotic energy and serene, human-scale beauty

Want to know the real city? Writing about Tokyo for over 15 years, essayist and professor Michael Pronko opens up Tokyo life and reveals what’s beneath the gleaming, puzzling exterior of the biggest city in the world.

Whether contemplating Tokyo’s odd-shaped bonsai houses, endless walls of bottles, pachinko parlors, chopstick ballet or the perilous habit of running for trains, the 45 essays in Beauty and Chaos explore Tokyo from inside to reveal the city’s deeper meanings and daily pleasures. In turns comic, philosophic, descriptive and exasperated, Pronko’s essays have been popular with Japanese readers for more than a decade.”

These essays were originally written in Japanese and published in Newsweek Japan for a Japanese audience. Describing these as “travel essays” would probably seem strange to that original audience, yet once the author translates them to his native English for a non-Japanese audience, this label fits. As with any good travel writing, Beauty and Chaos explores what is different about or makes a particular place unique. Many of these essays look at something the author has noticed, often with his theory as to why Tokyo has this particular idiosyncrasy, that while sometimes obscure (indicating where blossoming cherry trees might be found at the right time of year on otherwise typical maps), says something about the city and its culture.

What stood out for me when taking these essays as a whole is not just how unique Tokyo is when compared to other cities, but how different Tokyo is from itself. I’m thinking specifically of the contrasts and sometimes contradictory faces of the city, which is captured perfectly in the title, Beauty and Chaos. An entertaining and insightful read that I enjoyed much more than I anticipated.