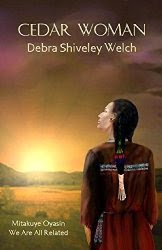 “Cedar Woman is a powerful book filled with courage, romance and the beliefs, ceremonies and language of the Lakota Sioux.

Travel with her to Columbus, Ohio as she rebuilds her life, and the lives of her family. Join her in the sweat lodge as she follows Zitka Mine to the fifth step of the edge of the world to find her father's soul. Join her at powwow where she meets her half side.”

This is a Native American story told in the fashion of a literary fiction novel. I like Native American stories about their culture, ceremonies, the way they honor mother earth. However, I am not a fan of literary fiction. I find it over the top in description of settings and actions. Interesting enough the Native American parts of the story didn’t seem to have this problem for me. It was the story in between where I saw the over description or the telling of daily mundane routines that actually had no impact on the story.

The book starts with Sonny walking down the street describing places he passes and telling us where he is headed. Then the story jumps back to 1955 and we meet Peter Spotted Eagle Catcher and soon after that Mary One Feather Fools Bull who are Lena Cedar Woman’s parents and learn their story. It is not until twenty years later that Lena Cedar Woman is born. I had a bit of a problem keeping up with the time jumps back and forth. The back story is interesting and necessary but not told in a linear fashion.

Ms. Welch proves she is very knowledgeable about the Lakota Sioux practices and beliefs. She inserts some of their language as well with phonic soundings, which are written out, and translations that are helpful. There is also a dictionary in the back for reference and a collection of recipes that are described and used in the story. So there were large portions of the book I enjoyed immensely. The ceremonies, the sweat lodge scenes, and powwow sections with the respect shown to elders were of particular interest to me. It was at the powwow that Lena first meets Michael and Sonny who become an important part of her story.

So the book moved along at a varying pace for me, parts I had to trudge through and other parts moved swiftly. I was not the ideal reader for this book. But if you enjoy literary fiction or Native American themes, in particular the Lakota Sioux, this may be a book you will enjoy.

This is Book 1 of The Cedar Woman Saga, Book 2 Spirit Woman is coming soon.

As far as missing or wrong word usage I found an insignificant number.