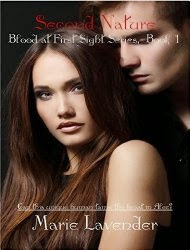 “Desiree Edwards has a problem. She’s been attacked, kidnapped and forced to get along with a vampire of all things. It’s something right out of the story books she reads, or her worst nightmare. But, sometimes he’s not the monster he appears to be. He seems so humanlike that she can’t help it when her emotions betray her, when her body betrays her. To make matters worse, she finds out more about herself than she ever wanted to know.

She was unlike any other…

Alec has a problem. The animal in him wants Desiree. But, so does the man. The more he learns about her, the harder it is to deny what he wants. But, he’s a freak, and she’s just a human. The two species don’t mix that way. Then an old enemy surfaces and Alec is forced to make a choice. His life or hers.

Can Alec’s soul be saved by this unique human? Or will it be far too late?”

Second Nature as an urban fantasy set in a contemporary world much like our own, with the exception of vampires, werewolves, and possibly other creatures we have yet to be introduced to. Desiree is a young divorcee who has immersed herself in her work to start a new life since the divorce. She has friends and family close by but is starting to feel like she needs a change of pace in her life or work. She hasn’t decided which yet.

The story is told expertly through alternating viewpoints so well that I was never confused about whose head we were in. Alec is a vampire, he lost his life from a sloppy vampire who changed him unknowingly on a battle field during the Civil War. So Alex was on his own, without a sire, to show him the ropes on how to be a proper vampire. This turns out well for Alec in the long run. He has made a good life, or unlife, for himself and has been quite successful. He doesn’t kill when he feeds, he erases his victim’s memory of the event and sends them on their way.

When Alec spots Desiree at the annual Jazz and Blues Festival he is mesmerized by her. Not only does she attract the vampire in him, she also attracts the man himself. There is an attraction between Desiree and Alec that neither one of them can deny, no matter how hard Desiree tries to deny it. There is also a bond that neither one of them can explain. Desiree has some kind of psychic connection that Alec has never experienced before with anyone else. This makes the story unique for me. The emotional turmoil that each character experiences is something I appreciated and it drew me into the story. I cared what happened to both of them.

There are a couple of plot twists that kept the story engaging. One I felt was coming, it needed to happen, it was tense and hard to read. However, I am glad it concluded the way that it did. Even though this is book one of a series, there is no cliffhanger. That made me happy. I look forward to more from Desiree and Alec, this story could go so many directions. Great job, Ms. Lavender.

This book has sexually explicit scenes that may be unsuitable for some readers.

I found a small number of errors.