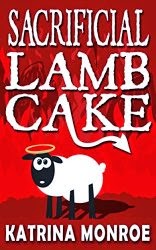 “Katrina Monroe is a novelist, mom, and snark-slinger extraordinaire. Her worst habits include: eating pretty much anything with her fingers, yelling at inappropriate times, and being unable to focus on important things like dinner and putting on pants.”

Rain Johnson escaped the insanity of her radical environmentalist family, only to end up waitressing for a living. Her scale of success—with her at the bottom—only goes as high as that college degree she never got, until she gets one hell of an epiphany from a Trinity Corporation public-relations guy who calls himself Jude. He tells her she’s the Lamb of God, and it’s time for that whole Second Coming thing. But when her first minor miracle gets her arrested and an ecoterrorist using the name Messiah starts blowing up pesticide plants, Rain and Judas are in for way more apocalypse than either of them expected.

Jude scrambles to save his personal plan for salvation, but Lucy, the devil herself, has her own well-laid plans. It doesn’t matter that Rain’s a conflict-avoiding lesbian and Jude is history’s worst traitor. They’re all that stands between humanity and an end of the world that wasn’t supposed to happen.”

If you’re a fan of Christopher Moore, have I got a book for you. The similarities between Moore’s work and Sacrificial Lamb Cake jumped out at me immediately. (That the title could even be a subtle nod to Moore’s Lamb didn’t occur to me until much later. Sometimes I’m slow.)

This is a fun, sometimes intense, adventure with God and his operations depicted as a large corporation (I’m not sure if this part is actually fiction), and appearances from a few biblical characters. Jude (you may know Mr Iscariot from his key role at The Last Supper) is given a chance at redemption, but his plans quickly go off the rails. If you’re up for a good laugh and some good-hearted poking of fun at organized religion, Sacrificial Lamb Cake will fill the bill. If you’re looking for something deeper, you should be able to find that here, too. If the idea sounds way too blasphemous to consider, move along, nothing to see here.