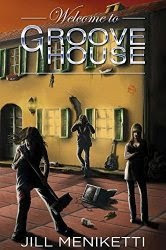 As the manager of her husband’s rock band, Y&T, Jill Meniketti has a unique perspective on the world of rock and roll.

“Lock up your grandmothers! . . . When rock's former biggest rebel loses everything, he's forced to call in favors from all the rock star royalty whom he'd burned his entire career.

With a trashed comeback tour, creditors on his ass, no record deal, a health issue he doesn't even know how to spell, and nothing but a few bucks from the sale of his last guitar, Mike Mays is destitute for the first time in his rock star life. He's forced to crash his estranged, uptight daughter's tidy world, and when she kicks him out, to couch-surf halfway around the world at a ragtag farmhouse in Tuscany called Groove House--home to a pack of aging ex-rock stars, who aren't thrilled to see him.

Mike creates chaos at every turn, bulldozing everyone in his path. His raunchy offstage antics snagged headlines back in the '70s and '80s, but can the aging bad boy bluff his way out of his worst bungle yet and actually stage a comeback?”

Anyone who even half-heartedly follows the books I review could have predicted I’d jump all over this book as soon as I saw it. I’m a sucker for novels that somehow tie into the music business. The characters in Groove House, especially the protagonist, Mike Mays, are satires and reflect the worst of what you might imagine from an aging rock star who once was and now only has been.

There are two main story threads woven together to form Mike’s story. The first is reconnecting with his estranged daughter and forming a relationship with his grandson who prior to this didn’t even know Mike existed. The second is the story of “Groove House,” an Italian villa populated by other rock stars now past their prime. This second story line was entertaining, although I’ll admit to groaning when I realized it was probably heading toward the clichéd “let’s put on a show” resolution. The first story thread, however, redeemed the second, with its exploration of the consequence of decisions, the importance of family, and a reminder that things aren’t always as they seem.

Adult language. These characters are rock stars, not priests. What else would you expect?