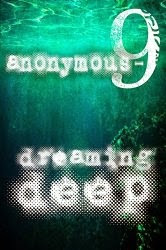 Anonymous-9 is the pen name used by a Californian named … I won’t tell you her name. If you really want to know, it slips in her bio at the end of this book. Anonymous-9 also has three novels and a couple short story collections available.

“The hardworking men and women at the Port of Long Beach, California have no idea what’s waiting for them in the deep water. Tugboat Captain Ed Angelus discovers the horror first in a death match aboard the Lady Bulldog, a high-tech z-drive vessel. But when the Coast Guard and Homeland Security arrive on the scene, there’s no trace, and Ed is declared delusional and unfit for duty. A few months later Ed’s former crewmen dredge up something chilling from the depths of Alamitos Bay—something horrific and possibly paranormal. Soon, the truth turns into ugly lies by authorities unwittingly manipulated by a dirty bureaucrat masterminding the investigation. Overnight, Ed finds himself a public enemy at the center of extraterrestrial black ops—outrunning the law until he can warn the world.”

I’m going to guess that fans of H.P. Lovecraft (who I’ve never read, although I at least recognize the name) will pick up on subtle things in Dreaming Deep that flew right past me. It was a good read, regardless. As the author explains in an explanation at the book’s conclusion, it started as a short story in a collection that was a tribute to Lovecraft (later available as a standalone short called Just So You Know I’m Not Dead) and now expanded to novelette length.

Although it has horrific elements, as you’d expect due to the Lovecraft-ian origin, Dreaming Deep reads like a thriller as much as a typical horror story. I found it an intriguing thought experiment. I don’t want to give details not in the book description, so need to be vague, but consider the possibility that things happen to you which if you talk about them would be interpreted as a sign that you’re insane. However, they’re really happening. How do you react? How do you deal with it? A short, fast-paced read that comes to a satisfying conclusion, while setting up for more to come.