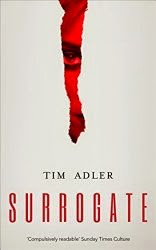 Tim Adler is an author and journalist who’s written for a number of UK broadsheets. He is a former London Editor of Deadline Hollywood, the US entertainment news website. Before that, he edited film trade and business magazines. He regularly features as a pundit on BBC Sky news programmes.

Hugo and Emily Cox are unable to have a child of their own by natural means so they employ the services of a surrogate mother, Alice. But, in a moment of weakness, City high flier Hugo has a one night stand with Alice. She swears the secret is theirs only, but soon pregnant Alice has moved into Hugo and Emily’s home and starts to worm her way into their lives.

But after an argument Alice flits with the unborn baby, a ransom demand for £1 million soon follows. Pay up or never see the baby again.

At the same time Hugo is trying to sell the insurance business he runs, one set up by his father, to a huge American company that will make them both even richer than they already are.

I’ve previously reviewed the author’s debut novel, Slow Bleed, which was a well written page turner. However, although Surrogate is another suspense fest psychological thriller, Adler has taken a step on.

I thoroughly enjoyed the story which kept my attention throughout. The plot and the character’s motivation is entirely believable and the way the author unfolds then concludes the strands is very well done – even when you think it’s obvious what’s going on Adler manages to throw another twist in.

The characterization is excellent – Hugo is a rich kid with a domineering father who learns to stand on his own two feet. Alice is suitably crazy (with shades of Fatal Attraction) and Emily who’s superbly manipulative and driven.

This was very close to being a five star review. There were a couple of places where the pace slowed, in particular early on when the couple are attempting to conceive after a strong opening. However, this is entirely understandable, it explains a lot which the later plot development relies on. I’m really looking forward to reading more of Mr Adler’s work in the hopefully not too distant future.