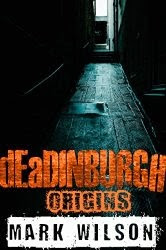 Mark Wilson is a biology teacher in Fife, Scotland. He is also the author of four novels, his most recent being dEaDINBURGH. In addition Mark formed an independent publishing company in 2013 to publicise Scottish authors. The author lives in Edinburgh with his family.

A prequel novel accompanying the dEadinburgh series of dystopian novels.

This is the third installment in Wilson’s dEadinburgh series. As a recap the city of Edinburgh is cut off from the outside world after the outbreak of a virus that turns its victims into zombies. This occurred when the vaults of Mary Kings Close were reopened after centuries. Victims of the Black Death were locked down here in the distant past. But the virus survived.

This novel is different to the others, however. It covers a number of the major characters who made an appearance in the previous books and outlines their origins – hence the title. Think of the X-Men movie. The characters in question are Somna, Bracha (who has a very surprising heritage), Michelle Macleod and Padre Jock. The latter is my favourite.

The timeline is cleverly handled, this could so easily have been dealt with clumsily. But Wilson is too experienced a writer to fall in that particular hole. The flashbacks start just prior to the outbreak, run through the fall of Edinburgh and to a relevant point in time that overlaps with key events in the previous stories which the characters were involved with. I’ve made this sound more complicated than it actually is.

For example Macleod herself was a bit part player in the first novel, the barely mentioned, long dead mother of a primary character who spends most of her time off the stage. However here she comes to the fore and we learn for the first time the sad and gruesome story of how she ends up in the city and how she loses her life.

Then there’s Jock, who’s in the city and at the opening ceremony when the zombies break out. Over time he loses his whole family.

Don’t expect happy endings, that’s not Wilson’s style. This is the grim reality of a harsh dystopia. But despite all the dark shadows this is an absorbing, well constructed read that really adds to the previous novels, providing depth and background to a level I don’t think I’ve come across before.

If you’ve a thing for zombie novels, look no further.

Nothing of note if you like zombies and all this entails. And vice versa.

This was a pre-publication copy.

This looks interesting. Thank you for the review Mr. Nixon!