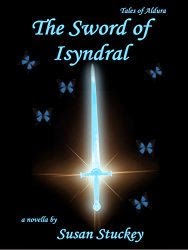 Author:
“Susan (Stuckey) has retired from the ‘rat race’ and currently writes stories she would want to read. She has mainly written fantasy, but dabbles in other genres also.
Susan is a proud mother of an active duty soldier.
Because, as her son tells her, she is ‘older than dirt’, her photos are in albums on shelves–not digital. (She knows she is way behind the times.)”

To learn more about Ms. Stuckey please visit her website or her Facebookpage.

“When her parents are murdered by traitors, Allena Telrae becomes Chief of the Dragon Clan. Though ill-prepared and untested, she takes command of Dragons Keep as enemy forces stream through its gate. Facing more than six-thousand of the Dark God’s servants, Allena unsheathes the Sword of Isyndral to summon allies. Will help come or will her people be decimated? Conditions turn desperate when the Dark God himself joins the battle. Can she solve the puzzle of the Sword to defeat the enemy and thwart the Dark God's plans?”

The Tales of Aldura continues to grow in this excellent addition of The Sword of Isyndral. The fates of two clans, the Njae Clan and the Dragon Clan are interwoven, yet again. However, all the clans of Aldura are at risk of annihilation by the Halurdrow and the Dark God himself, Urdow, if Dragons Keep falls. There is intrigue, magic, broken oaths, dragons, treason, and an epic battle.

Allena must learn the secret to unleash the Twin Gods magic from the Sword of Isyndral in the midst of an epic battle surrounding the Dragons Keep. Tayril of the Njae, holding a Shadow-Isyndral from the Twin Goddess, arrives on the back of Asha, a dragon descended from Stormwing to offer their aid to Allena.

Dragons were the creation of Urdow and Stormwing was the first dragon to reject Urdow for the Twin Goddess. He was also the first dragon to accept a rider. I love that dragons are now in the story. The Twin goddess also makes a few appearances in this tale, as well as several other characters from past stories. I love how the complexity of old friends are developing and becoming more defined. The whole scope of the Tales of Aldura is growing. It is amazing how much story Ms. Stuckey can pack in so few words. She is a masterful storyteller. I always enjoy the way she tells a story.

I believe this is novelette length and should be read after Phaedra.

Thank you ever so much for reading my story and for your lovely review.

You always make me smile because you enjoy my tales.

Ms. Stuckey, your tales and characters are wonderfully unique and compelling. I always enjoy them. :D