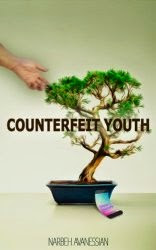 Alexander the Great is said to have uncovered a healing “river of paradise” in the fourth century B.C. Juan Ponce de Leon searched for the Fountain of Youth in Florida circa 1474. Throughout history man has been seeking the key to immortality. Thus is the premise of Counterfeit Youth.

By the tender age of 18, Jackson Riley had witnessed the early deaths of his parents. The multi-billion dollar heir of a major corporation became obsessed in finding the secret of longevity. However, once he went public with his scientific breakthrough, the bedlam began.

Narbeh Avanessian takes readers from Jackson’s early days in 2036 as he faced his father’s battle with lung cancer to 2052 when privately funded researchers studying Jackson’s blood and DNA uncover the secret Alexander the Great and Ponce de Leon couldn’t find.

Counterfeit Youth is well written and edited. The premise of the story held this reader’s interest from beginning to end. The two areas of weakness in this novella were character dialogue and character development.

Too often the dialogue seemed forced and unnatural. Jackson Riley’s obsession, a kind of madness, was told to the reader, not shown. Girlfriend Nicole wasn’t three-dimensional and felt like a stick-character. When Nicole returned after leaving Riley 14 years later, her words and reaction to Jackson’s success didn’t follow her behavior. This reader perceived her to be a deeper character, but the author neglected to bring that out in dialogue and storyline.

However, the plot was compelling, the page-count around 70 pages made this novella a worthwhile reading experience.