The Weight of Guilt / Jon Ripslinger 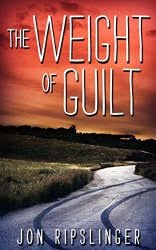 “Driving home from a bonfire party, eighteen-year-old John Hawk crashes, killing his girlfriend, Riley. Bullied and tormented at school, and crushed by his guilty conscience, John transfers to a school on the banks of the Mississippi River, where he attracts the eye of the principal’s daughter, Megan. Though he’s reluctant, she convinces him to be her prom date. The morning after prom, Principal Jones reports Megan missing. Four days later, her body is recovered from the river, and John becomes the prime suspect in her death.

Charley Cotton, Megan’s best friend, knows that Megan had a secret, but she doesn’t trust John because of his past. John is desperate to avoid adding to the shame he carries for Riley’s death, though—it’s destroying his life. With Charley’s help, he learns that others in Megan’s life had a motive to keep her quiet. But every effort they make to uncover the truth edges them closer to a desperate murderer with everything to lose.”

This book has a lot going on. It's a thriller, with a mystery (how did Megan die) at it's heart, and has a bit of romance and a coming-of-age vibe to boot. Themes revolving around personal responsibility, redemption, family, and friendship setup some subtle lessons for the reader who notices while keeping up a quick pace and ratcheting up the tension if you just want a thriller.

The point-of-view character alternates between John and Charley giving us different takes on what is going on as we get into the mind of each. I didn't have any issues keeping track of which character's POV was current, even in those rare chapters where each took a turn leading the way. Both John and Charley were appealing. Not without quirks and faults, but both likable and kids you could feel for and hoped to see get through this experience intact. A good read, whether you're in the obvious target demographic or even, like me, more than just a few years past.

Email ThisBlogThis!Share to TwitterShare to FacebookShare to Pinterest
Labels: 4 Star, fiction, Thriller, YA

Thanks for the review. It's greatly appreciated!