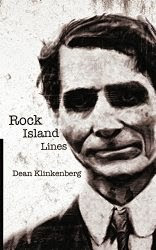 “Frank Dodge, disgruntled and desperate for a story to write about, has a hot tip: Miguel Ramirez could be one of the last surviving descendants of a brutal gangster named John Looney. Dodge sees this as a good story to sell, so he concocts a plan to meet the young man. When Ramirez is found floating in the Mississippi River, Dodge finds himself without a story and on the wrong side of a murder investigation. As Dodge and his buddy, homicide detective Brian Jefferson, go over the surprising events of the night Ramirez died, clues about the death of Ramirez will come from an unlikely source: the life of John Looney.”

Although Frank Dodge is the protagonist and narrator of Rock Island Lines, The Quad Cities (Moline and Rock Island, Illinois, Davenport and Bettendorf, Iowa), play such a major role in the story that they’re almost characters, too, with the history of these towns playing as much of a role as Dodge in the story. If the author’s goal was for the reader to view this area as more than just a pit stop on Interstate 80 (my previous opinion), it worked for me.

This is both the strength and the weakness of this book, depending on the taste of the reader. If the reader is fan of mysteries and also has an interest in history, this is an excellent choice. The historical aspects are integrated well with the overall story and don’t feel forced, but if your taste for history is limited, that aspect may be too much. Not knowing a lot about the Quad Cities when I began, I suspect those who are familiar might find even more to like than I did. I did appreciate the shout out to Greg Brown and William Elliott Whitmore, a couple of Iowa musicians who would be obscure to many, which led me to believe there could be other subtle touches that those more in the know would pick up that I missed.

Although this is Klinkenberg’s first novel, he did a credible job. The only nit I have to pick is a minor tendency towards repetitiveness, but not so much as to be an irritant. I enjoy the character of Frank Dodge and since Rock Island Lines is billed as the first of a series I’m guessing we’ll see more of him in the future. Based on the author’s biography, I’m guessing we’ll see Dodge solving mysteries and introducing the reader to the history of other towns along the Mississippi. I’m eager to see what Dodge finds in places like Red Wing, Hannibal, and Helena in the future.