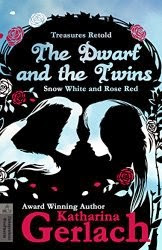 “Katharina Gerlach was born in Germany in 1968. She and her three younger brothers grew up in the middle of a forest in the heart of the Luneburgian Heather. After romping through the forest with imagination as her guide, the tomboy learned to read and disappeared into magical adventures, past times or eerie fairytale woods… For a while, reality interfered with her writing but after finishing a degree in forestry and a PhD in Science she returned to her vocation. She likes to write Fantasy, Science Fiction and Historical Novels for all age groups.

At present, she is writing at her next project in a small house near Hildesheim, Germany, where she lives with her husband, three children and a dog.”

“When Martin helps a pregnant woman to flee from the king’s men, he doesn’t know that the twins she bears will change his solitary life forever. What if the Brother's Grimm misunderstood the dwarf in the original tale of ‘Snow White and Rose Red’?

The book includes a bonus story and the original fairy tale.”

Who doesn’t love retold fairy tales? I love the imaginative way Katharina Gerlach told this story. With an evil greedy King slowly destroying his kingdom and his fairy godmother. You don’t remember a fairy godmother in this tale? Well there’s one in this story and she plays an important role. Many years ago she gave Martin a magical beard, and he has used it well to save his hide many times.

When Martin, our dwarf in this story, sees Adele, quite pregnant with twins, running from the King’s search party he hides her with his magic. They have just killed her husband. Here she gives birth to two girls and she asks the dwarf to name them. He names them after the two rose bushes he finds the next morning. He pricks one finger of each baby and imbues the rose bushes with magic to protect the girls and Adele. He plants the roses outside their cave home to hide the entrance. He names the girls Rose Red and Snow White.

Martin can see the King’s son following in his father’s footsteps unless he can intervene and show him his father’s true character. This is where Ms. Gerlach spins her version of the girls growing up and Adele’s late night talks with Martin. It’s enthralling and magical. Kids will love this retelling as much as adults.

This book also includes an extra story, Snow White’s Father, which is a little more closely related to Disney’s version of Snow White, but with an interesting twist. It took me a second or two to wrap my head around this version because my mind hadn’t made the transition to the new story. Snow White is only the nickname given to Princess Anna by the seven dwarves. I had to laugh-out-loud at the last sentence of this story. :D I was also pleased that the Katharina Gerlach included The Original: Snow White and Rose Red by the Brothers Grimm at the end.

The Dwarf and the Twins: Snow White and Rose Red is Book 1 of the series Treasures Retold. I think all three stories in this novelette could be shared with young children.

I noticed no proofing or formatting issues.