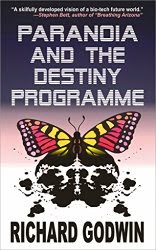 Richard Godwin is a widely published author, with a focus on horror and crime, poet and playwright. He holds a BA and MA in English and American English. He splits his time between the UK and US.

Dale Helix can’t make sense of the world. He thinks he may kill people on behalf of The Assembly, a shadowy group who run the dystopian city in which he resides. No one believes him, including his wife and daughters. The Destiny Programme is social engineering at its worst…

This is a book whereby it is difficult to put a finger on the genre. It’s located in a science fictional world, yet many of the themes reminded me of Godwin’s previous work. Of those I’ve reviewed they split between mainstream and not, straightforward and highly complex. In the former camp is Confessions of a Hitman and One Lost Summer. In the latter Piquant Tales of the Mustard Man, Meaningful Conversations and now this novel. All bar Hitman have a very strong psychological element.

Personally I’ve preferred the mainstream output, in fact they’ve been some of the best books I’ve reviewed, but that is down to my preference as an individual – I don’t wander too far off the centre line and ultimately this affected my overall rating in comparison to Hitman and Summer.

One aspect is unarguable, the quality of the author’s writing is clear in all the cases, as it is here again. Godwin can no doubt write, and write damn well. He adopts a unique use of language. I guess in this case I struggled a little more to understand what the hell was going on. The style is present tense and from Dale’s perspective. He’s a mess – is he mad or going mad? Is the stuff that he thinks is happening actually occurring? Who are the people surrounding him? What is the Assembly? And the Programme itself? This novella sat in my mind long after I’d finished it.

In the end it does come together, in Godwin’s trademark fashion. This novel requires concentration and an open mind to best enjoy. If you like something a little different and with multiple layers of complexity then boy, is this the book for you…

Several uses of the strongest of language.