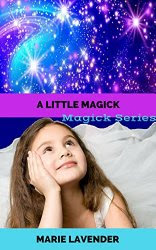 “Little Rosie goes to stay with her uncle. There she meets some new friends…and some enemies. She doesn’t know that her emotions will trigger something unusual. So far from home, suddenly Rosie has become a full witch like her mother. For a time, it is great fun to use her powers the way she wants, but can Rosie figure out how to use these newfound powers for good or will she be lost to the dark side forever?”

A Little Magick is book two in Marie Lavender’s Magick Series. In book one Jessie and Ethan Hamilton meet in an awkward moment during Magick & Moonlight. It is about ten years later in this novella and Jessie and Ethan now have a nine year-old daughter, Rosanna. The story opens with Jessie driving Rosie to stay with Ethan’s brother Adam in Seattle, Washington for a few weeks. Jessie has other obligations right now and Ethan is training for a new job as Sheriff, which could involve late nights. Since Rosie has not come into her powers yet they don’t foresee any problems. Adam knows Jessie is Wiccan, but he doesn’t understand what all that means so he is a little uncomfortable around Jessie. However, he loves his niece and has made arrangements to work from home while Rosie comes to stay with him.

Uncle Adam has a huge house with a theater room and he has built a treehouse out in the yard for Rosie, complete with windows, a bean bag, and books. There is also a cook, Selena, who comes in and cooks breakfast and dinner. Rosie notices the way Selena watches her Uncle Adam when he isn’t looking and lets him know. Adam and Rosie are getting along great when through a serious twist of fate Rosie’s powers begin to manifest right under Uncle Adams nose.

This is a children’s book written for children, which I didn’t feel like Magick & Moonlight was. The story is told simply and I felt like Rosie’s nine year-old character was written a bit under aged, she seemed younger than nine to me. However, A Little Magick can be read as a stand-alone story. It’s an entertaining and thought-provoking novella kids will enjoy.

This is book two in Marie Lavender’s, Magick Series. Book one is Magick & Moonlight.

I noticed no significant proofing issues.