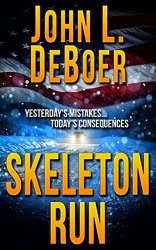 A retired surgeon and father of two grown sons, John DeBoer lives in North Carolina with his wife. He has written five other novels.

"Twenty years ago, four teenage boys left a baby behind in a crushed car after they caused the tragic accident that took the mother’s life. Ever since, they’ve guarded the secret that would’ve ruined their lives and destroyed their future careers. But when one of them succumbs to illness, a blackmailer makes contact, and the survivors realize that, somehow, someone else knows. Now, everything that matters to them is at stake.

Las Vegas billionaire Wendell Logan is pursuing the role of political kingmaker, and he’s selected his unsuspecting king: Alan Granger, governor of Pennsylvania. Granger confesses his closet skeleton to Logan, but the tycoon has invested too much time and money into Granger’s future presidential campaign to let him and his old friends endanger Logan’s power play.”

There are a couple of major themes that run through Skeleton Run. The first and most obvious, how skeletons in the closet can come back to haunt you. While many of us made mistakes when we were young and stupid, I trust few of us have skeletons as serious as the boys in this book. The other theme is money in politics, specifically by looking at what might go wrong with allowing the rich and powerful to have few restraints on political donations in the wake of the US Supreme Court's Citizen's United decision. The result is a fast-paced thriller with some entertaining twists, including an interesting way of tying the initial thread of the accident and the baby left behind to the more current timeline and political intrigue. Thriller fans will find Skeleton Run to be an intense, satisfying read.