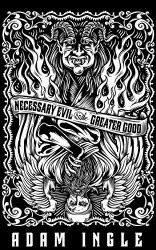 “Adam Ingle is a basement-dwelling, graveyard-shift nerd by night and an aspiring peddler of exorcised creative demons by day. He and his chinchilla live in a tin can on the side of the interstate somewhere in South Carolina. Necessary Evil and the Greater Good is his first novel.”

“For best friends Mestoph and Leviticus the end of the world can’t come fast enough. Mestoph is a demon and troublemaker for Hell Industries, while Leviticus is an angel and cubicle jockey for Heaven, Inc. They might be unlikely friends, but they have something in common - they both hate their jobs. Unfortunately for them The End is nowhere in sight. The two take matters into their own hands when they come up with a scheme to get themselves kicked out of the Afterlife without spending an eternity in Purgatory. Their misadventure will take them from the tiny town of Truth or Consequences, NM to the highlands of Iceland as they cross paths and pantheons with Neo-Vikings, Greek and Norse Gods, and a Scottish terrier named Sir Reginald Pollywog Newcastle III.”

Adam Ingle has an extraordinary imagination and an ability to string words together to tell an epic-scaled tale. For this to be his first book, I am properly impressed. It’s unique, creative, and thought provoking. There are horrifying as well as comic events all woven expertly together.

Mestoph, son of Mephistopheles, didn’t have the hate, anger, and rage his father had. That’s not to say he wasn’t a trouble maker by any means. He and his Angelic best friend Leviticus, an angel with a desk job, are bored waiting for the apocalypse to start. They were known to concoct wild plans to cause enough chaos to start the apocalypse, since it was way overdue. Most of their plans were exposed and stopped before any real trouble started. However, this one is a little different. It involves two under-the-radar humans, who in fact are destined to be together.

Marcus barely has the nerve to speak to Stephanie, the barista at a coffee shop, where he orders coffee every working morning on the way to work. Stephanie has started to have dreams, which usually involve her dead grandmother, and they have turned frightening lately. With some fast talking and not quite truths Mestoph and Leviticus get Marcus and Stephanie to follow them on their misadventure around the globe. Nothing goes the way it was meant to and there are surprises around every corner. With a whole cast of interesting characters, the plot is fast moving and extraordinarily unique. There are a number of twists and turns throughout the story, but I enjoyed the humorous ones in the last chapters the best.