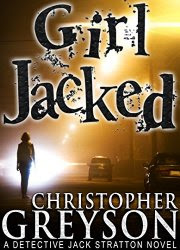 Christopher has written the best-selling Jack Stratton mystery series with over 100,000 eBooks and paperbacks in distribution. The collection includes "Girl Jacked", "Jack Knifed", and "Jacks Are Wild". His latest novel "Jack the Giant Slayer" is due out summer of 2014. His background is an eclectic mix of degrees in Theatre, Communications and Computer Science. For more check out his website.

Jack Stratton, an Iraqi war veteran working as a police officer, is called on to track down his missing foster sister. The task proves far more complicated than it first seems.

I didn’t realize this was such a popular title when I picked it (I usually try to give reviews to books that need them more). However, once I started reading I didn’t want to put the book down. The plot speeds along at a cracking pace, and Mr. Greyson manages to add layer upon layer of backstory to his two main characters—Jack Stratton, and Alice--the eighteen-year-old sister of his foster brother, best friend, and Iraqi comrade in arms. The author pulls off a clever sleight of hand here, because these two characters start off pretty two-dimensional, and end up multi-faceted.

The plot twists and turns, covering a lot of ground and comes to a satisfactory ending which sets up the future books in the series. There is no doubt that these two characters have a lot of books in them.