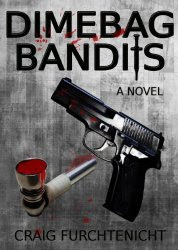 The author was born and raised in Iowa where he currently resides with his wife. Craig enjoys rock hunting, horticulture and the outdoors. He has released other work including The Blue Dress Paradigm and Night Speed Zero.

Kori Woodson is in trouble. When he learned his stepfather preacher had given Kori's college savings to the church he decides to makes ends meet by stealing and selling drugs. The problem? He gets caught and finds himself bundled off to live with his brother and father in rural Iowa, far from the city's bright lights.

Almost as soon as he returns home Kori is dragged into his brother's nefarious schemes – robbing drug dealers and selling the proceeds. These are the Dimebag Bandits...

This is an interesting, well written story (with a caveat that I'll get to shortly). It opens with a hard-hitting scene, several unknown men rob a bar owner of his drugs stash, using some pretty stiff techniques to loosen up his tongue. Next we're with protagonist Kori, he's in a police interview room witnessing fellow wrongdoers and their antics as he awaits judgement for his theft.

His preacher stepfather is, from the outset, a hypocrite (he had an affair with Kori's mother) and instantly detestable. In fact, the majority of characters in Dimebag Bandits are thoroughly unpleasant – thieves, drug users, bent cops to name but a few. Everyone is out for a buck and puts themselves first, even resorting to murder in the process.

The characters are one of the major strong points of this generally excellent novel. They're well drawn and engaging and, via their actions, drive the story along at a pace that never really lets up. Like the story itself the characters are seedy and often nasty, in particular Virge the Perv, a paedophile who films his activities and is key in the later story.

The other strength of Dimebag Bandits is the hard-bitten scenes and back stories of which there are many. They swing between gory and gruesome, but most have a humorous vein, something that cuts through the entire book. I'd like to describe them, however, it is something that's best discovered by the reader themselves. Don't expect soft views from the author, in fact it's the opposite. The characters and their portrayal may offend some.

All in all this is a very strong read, the author shows plenty of promise. The only issue I would flag is the need for a small amount of editing to tighten up some of the narrative, an easy 'issue' to resolve. Normally this would be a factor that would thoroughly irritate me and ruin the overall story, however the quality of the writing deservedly pushes this to one side. A writer for the future.