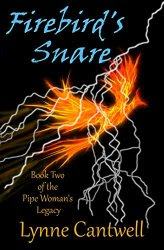 “Lynne Cantwell is a contributing author at Indies Unlimited where she shares her knowledge about Indie publishing and promotion. She has a master’s degree in fiction writing from Johns Hopkins University and is a former broadcast journalist who has written for CNN and Mutual/NBC Radio News, among other places. Ms. Cantwell currently lives near Washington, DC.

“Sage Curtis, engineering student and reluctant Savior of the Earth, is not having her best month ever. She is almost reconciled to the idea that she will have to use her Thunderbird powers to reverse the damage humans have done to Earth’s climate – but those powers haven’t helped her much so far. While recovering the world’s supply of fresh water from the Slavic underworld, she and her friends unwittingly triggered a ten-foot snowfall across the Northern Hemisphere. Now people and crops are dying, and the snowmelt threatens to cause the seas to rise, wreaking further havoc.

Sage and her friends have to get rid of the snow safely before they can roll back climate change. The clock is ticking, the learning curve is steep, and the gods will be no help. They have already said that if humans can’t fix the climate, They will destroy the planet and start over.

Sage must use everything she knows about both science and magic to save the Earth – and even that might not be enough.”

This is a book of reckoning, actually both books in this series are. I didn’t see it or recognize it in Dragon’s Web as clearly as I did in this story. Sage has been weighted down unfairly by the prophecy which states, she alone will save the world. I think because she was born a firebird, a symbol of renewal, even the Gods jumped to this conclusion. She has fought this label her whole life by turning her back on her powers and focusing on science and education to save the world. Webb can’t deny his powers ― he lives and breathes them. He started knitting at the age of three and it’s a cosmic joke that one of his super power is knitting.

Since Sage’s and Rafe’s college classes center around the sciences of environmental studies, Ms. Cantwell uses this to educate her readers on what needs to be done to remove excessive greenhouse gas surrounding earth. We also get another foray into Native American myths as Rafe is attacked again. Sage worries about Rafe’s loyalty to her when a female friend from his past suddenly reappears. Webb and Sage realize Rafe is under a spell from a mythical creature. This draws visits from Grandpa Drew, Rafe’s mother, and a Tlingit shaman named Lawson Shakes, who made a trip to Denver with Rafe’s mother from Alaska. This storyline keeps the tension high while Sage tries to sort out her feelings about the prophecy, the Gods, and her deep feelings for Rafe.

Ms. Cantwell does an excellent job weaving the different plot arcs together seamlessly. Webb seems to be maturing and coming into his own rather nicely. He has impressed his Grandpa Drew and Shaman Lawson Shakes, as well as Hilary and Sage. I have to say again, this is a story of reckoning on many levels and Sage handles herself well once she has the support of her own Goddess. Sage has a heart of gold and an abundant strength of will when she gets going. She is the Thunderbird and she proves it when she owns it and confronts The Gods. She will make her family and The Gods proud.

I hope this isn’t the end of Sage’s and Webb’s story. I would love to see more from them. Ms. Cantwell is going to need some of her own divine inspiration because Webb starts his school year at CU in the fall and Rafe and Sage don’t graduate for two more years.

Firebird's Snare is Book 2 of the Pipe Woman's Legacy series. I believe it is best to read Book 1 Dragon’s Web first.

No proofing errors to speak of.

Sounds great! I just finished the previous book, and I'm about to read this one.

Thanks for dropping in and commenting, Ms. Boris. I can't wait to hear what you think.