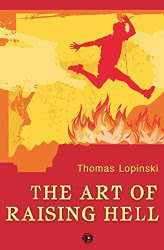 Thomas Lopinski studied at the University of Illinois and later moved to Southern California with his wife and daughters to work in the music industry. Document 512"was his first published novel in 2012 and won awards from Reader Views, Foreword Review, National Indie Excellence Awards and BestIndieBooks.com.

His second novel The Art of Raising Hell"is published through Dark Alley Press and is a 2015 Kindle Book Awards Semi-finalist novel. Thomas is also a member of the Independent Writers of Southern California (IWOSC). More at his website.

Newbie Johnson has recently moved to Bunsen Creek, Illinois, when his mother is killed in a tragic car crash. His father does his best to maintain a normal household, but his broken heart is just not up to the task. Newbie finds solace by hanging out with his three buddies in their clandestine Backroom hideout. Getting into mischief becomes their favorite pastime as they try to follow in the footsteps of Lonny Nack, who has perfected the art of running on all four.

“Running on all four” takes on a new meaning for Newbie when he finds his inner voice and begins to understand the difference between chasing life and being chased by it.

I rarely read coming of age novels. I consider myself too old to relate. So please keep that in mind when reading this review, but the writing in the Amazon sample grabbed hold, so I took the plunge.

The novel comprised a series of anecdotes told by Newbie Johnson (in first person). Through the adventures Newbie and his friends had, I got an interesting profile of small town Illinois in the 60s and 70s. Newbie and his pals and the local townsfolk were well drawn and their antics had me laughing on more than one occasion.

The writing was engaging throughout. The only disappointment for me was a lack of tension. Certainly, there were tense moments, but to me this read more like a series of short stories than a novel. The main character was central throughout, but because the action was related to each anecdote, challenges were too easily solved for my taste and the story didn’t seem to have an overriding purpose.

Check out the funny short book trailer of "The Art of Raising Hell" by the cutest set of triplet girls you'll ever meet.