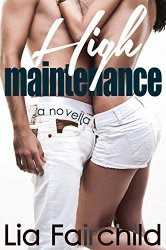 "Bestselling author, Lia Fairchild, is both a traditionally published and independent author who writes women's fiction, romance, and chick lit. Fans of her books praise her endearing, real characters who come to life in stories that will touch your heart.

Fairchild is addicted to the warmth of Southern California and holds a bachelor's degree in journalism and a multiple-subject teaching credential. She is a wife and mother of two teenagers."

“Lexy’s apartment is a dump, but she refuses to move in with her controlling fiancé. Instead, she takes matters into her own hands, getting down and dirty to fix things. Then Tate, the super’s sexy son, shows up. Lexy and Tate spar over the latest maintenance issues, generating more heat than the record-breaking temperatures that have invaded their city. As her attraction to Tate grows, Lexy becomes more resistant to her fiancé’s demands, putting a wrench in her relationship and her impending marriage.”

Lexy is a strong-willed, smart, independent, Latino woman who wishes to make her own way in the world. I enjoyed the sexual innuendos at the beginning and throughout the story. The characters are well developed and relatable. I enjoyed Lexy’s best friend, Mimi, and her quirky neighbor, Mrs. Granger. Lexy’s fiancé, Julian, is rich and arrogant, but tries to give Lexy the feeling that he allows her to make her own decisions while still manipulating behind the scenes.

Tate and Lexy’s banter is clever and engaging. While he tries to be respectful of the fact that Lexy is engaged, he sees Julian for the scoundrel he is, Tate is biding his time while becoming friends with Lexy. The twists in the story are well played and believable. I found this an intelligent, fun novella and suspect I will be picking more books from Lia Fairchild in the future.

Strong adult language. Sexual situations are not behind closed doors.

I noticed no proofing or formatting errors to speak of.

Thanks so much for the wonderful reviews. So glad you enjoyed the book.

You're welcome, Ms. Fairchild. Thank you for dropping in and commenting.