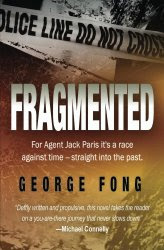 George Fong is a retired FBI agent with 27 years service investigating violent crimes from robberies to murder. He is currently the Director of Security for ESPN. George started writing to find himself again. Fragmented is his debut novel.

Then Cooper escapes from a minimum security prison. When a young girl goes missing Cooper is the chief suspect and Paris is on the killer’s trail again, trying to find the girl before the past happens all over again…

I’ll admit to a bias right up front – I struggle with anything, whether it’s film or written word – that has child abuse at its heart. This is not to say that Fragmented is graphic or abusive, it’s not. But the idea of a child being kidnapped and maybe abused sends me cold.

However, putting this to one side as much as possible, Fragmented is a very well written book. It is pacy and peppered with twists and turns throughout. Just as the detectives think they’re getting near their man and the child, he’s gone again in a puff of smoke. Tension is created from pretty much the first page and remains throughout.

Fragmented shines a light on the murky world of abuse. It’s not pretty and the author stops short of a full punch to the gut, but it’s close enough. And I guess that’s where the strength of this story lies. That the author was able to produce this level of reaction within me.

The characters are strong, particularly Jack Paris. After twenty years in the FBI he’s wondering if there’s more to life, with an estranged wife and a job offer on the table he’s on the cusp of change. The author’s own knowledge and experience shines through. Fong also benefitted from the quality editing of Joe Clifford, himself a leading writer.

An excellent debut – it’s clear Fong has a hell of a career ahead of him.