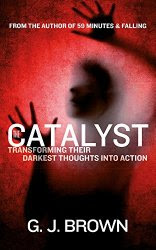 Gordon Brown is a marketing executive by trade. He has lived and worked abroad, including a stint in Canada. He was born and still resides in Scotland with his family. When not working Gordon writes and is a founder member of the Bloody Scotland literary festival and he shares the same name as the ex-Prime Minister of the UK. Apparently Gordon is very bad at playing golf. Catalyst is his third novel.

When a US senator sees the unique potential to create the ultimate assassin he orders a covert agency to capture Craig and Craig's wife, Lorraine.

In an attempt to mould him into a lethal weapon, the senator has Craig drugged and tortured and forces him to witness Lorraine's murder.

Craig escapes and, distraught at the death of his wife, he vows to kill the senator. But he has to act fast because the agency has orders to hunt him down and bring him back: dead or alive.

Well, this is an interesting novel and a different take on the use of a person as a weapon. McIntyre, is no slouch when it comes to his military abilities, but throw in his ability to force people to turn on each other he’s deadly. The trouble is McIntyre is at first unaware of his ‘skill’. Once he gains awareness (by force) he can’t figure out how to control it. Instead a US senator tried to turn him into a killer to be directed as he sees fit. McIntyre wants to break out, but he can’t and in the process he ends up killing the few people around him he cares about and many more beside. And there’s absolutely nothing he can do about it.

Overall it’s brightly written. Brown has a taut, very economic style to his narrative that whips the story along at pace. Descriptions are minimal, which adds to the breakneck speed. Being written in the first person adds greatly, the reader becomes immersed in McIntyre’s world, sensing his confusion, his loss and, ultimately, his hate.

I thoroughly enjoyed Catalyst and read it over a couple of sittings. It slips along easily, the twists and turns in the plot kept me well entertained. If you like something a little different, this is the book for you. Cleverly plotted it’s a winner.