One Night in the Hill Country / Felipe Adan Lerma

Join me in welcoming our newest Pal, Sam Waite, with his first review for Books and Pals today. 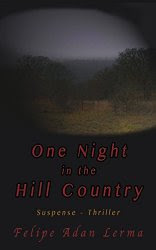 Felipe Adan Lerma’s works of fiction include, among others, the Samantha (Sam) Lacroix series of suspense novels; Slumming in Paris series of short works, and several books of poems. When not writing fiction, Mr. Lerma spends time with his grandchildren, practices yoga and paints.

A young Mexican girl wandering the streets of a Texas border town is picked up by an apparently well intentioned woman who steals a kitten from a truck for the girl to hold and to help win her trust. The kitten is later the key to a mystery. The girl is taken to a Hill Country vineyard and held with other children by the woman and her brother, who put a twist on human trafficking. The children are used as bait to lure pedophiles. The siblings were abused as children and left with deeply scared psyches that fuel not only their drive for vengeance, but also latent incestuous feelings.

The creative story line and early hook of the lone girl picked up on the border promise more than the book delivers. The twisted and scared characters that should chill the reader or evoke admiration and sympathy aren’t satisfyingly developed. Lupita’s parents were killed and she is told to flee or she will die. Why did she go to the U.S. instead of to a family member in Mexico? How did she cross the border? Why did she trust the woman, Tara? What are her fears or ambitions? The psychotic brother Rolf isn’t the dark and scary madman a reader deserves to hate. Tara goes through the motions of kidnapping children to bait bad guys, but we don’t see inside her mind. Have the siblings actually encountered a pedophile? We aren’t told or shown. What did or would they do if they caught one? There’s no hint.

The kitten, which has a distinctive star pattern on its head, is an intriguing plot device, but it is tracked down by a young boy using the Internet. I gave this a go on Google. It’s a stretch, even if one of the kidnappers had used a home computer to post kitten photos.

Many sentences simply made no sense or were jarringly bad writing:

“They lay breathless like a hand without a thumb.”

“Lupita ran her other eye up one side of the door’s light then the other.”

“Only their breaths moved.”

Still, the pacing is quick, the writing terse and the plot imaginative.

Problems with basic English plague the writing. A camera was robbed, which caused this reader to wonder what items the robber stole from the camera. “Bard wire” was a humorous standout among many typos and misspellings such as over-done, re-confirming, “now” instead of “know.” “Further” is consistently used to indicate distance. The book is written in third person, except for one inexplicable switch to first person. “I knew what he meant, but said, ‘How do you mean.’”

There is curious use of the dash, which sometimes replaces periods, or commas or in this case dropped into what should be a blank space:

“Tara gazed down at the girl - staring at Tara's childhood whelp on her arm.”

Sam, thank you for your review. I deeply appreciate your candor regarding phrases that struck you odd etc. I do get that and I understand.

It's a choice I've made to use the voice I know, like using "further" etc. And in doing so have to take the responsibility of the result. Some folk will like it, some won't.

Next, I need to apologize that you apparently, in your first review for Big Al's, read my own first submission to Big Al's.

I did send in a subsequent version with corrections, as per the site's suggestions for edited or changed versions (see below at end of comment), but it's still my responsibility to have insured the revised version was what would be used.

What's worse, on my part, was that after late September, I created another corrected file version, in January, but did not send it in.

So that's on me and a lesson now well learned not to send in a file until it's really finally ready. Changes included the definite miscue regarding the shift to first person from third person.

Still that leaves lots of expressions and similes that didn't work for you, and the degree of character development in this first thriller of mine.

And though I may disagree about the value or correctness of some of my expressions and phrases, your thoroughness, time, and thoughtfulness compel me to "think about" your concerns as I craft out my followup thriller. It already has much more character development and but also more similes. :-)

Plus, I especially appreciate the inclusion in your review of what you did like: "Still, the pacing is quick, the writing terse and the plot imaginative."

It's encouraging and helpful for me, all around.

I hope you continue with your reviews and receive many good works to read.

And I hope I'll be able to still submit my new book once it's done (hopefully early this fall.)

**What do I do if my book is in the queue for review consideration and I fix, change, or re-edit it?

If you submitted using an eBook file as an email attachment, send the new version, making sure to explain the situation in the email.

We will put forth our best effort to use the latest version in our review. However, mistakes do happen and once a reviewer has begun reading a book, it will be too late to use an updated version.

Adan, I can assure you that BigAl always attempts to send his newest files of a book when he receives them. It is always frustrating when I am reading a file for review and I wonder whether I have the most recent copy of the story or not. I can't tell you how many times I this has happened to me through no fault of BigAl's.

There are over a thousand book files in the database for reviewers to choose from. Many times books are not chosen for several months after submission and I fear some authors forget to send updated files. I will assure you though that BigAl notes submission dates and updated file dates on each file submitted.

The reason I am trying to reply to your concern is because BigAl is on vacation at the moment and doesn't have internet access. He will be back after the weekend. And of course he will look forward to future submissions from you.

Thanks so much for the info re book file updates. I take responsibility for not having turned in a needed 3rd version though I had updated it to Amazon in January.

Frankly I appreciate my book was picked recently and look forward to sending ya'll my next thriller, but after I've done what I could re typos etc. Stylistic creative choices I can't promise about except as true to my voice. :-) And of course take the responsibility for the variety of responses to those choices. Otherwise, what's the point of developing one's creativity? Expressiveness is, I believe, infinitely variable.

I think it's great BigAl does the job it does. It's invaluable for us as both readers and writers - thanks so much.