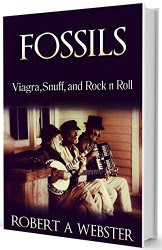 “Robert A. Webster is a multi-genre author based in Sihanoukville, Cambodia. Originally from Cleethorpes, UK, he embodies both hearty wit and adventurous vigor, making his prose insanely memorable and incessantly enjoyable…

His first novel Siam Storm received rave reviews in the expat community in Southeast Asia. Its sequels, Chalice and Bimat, were similarly acclaimed.

When he's not crafting unforgettable stories, he enjoys snorkelling, self-deprecating humour, and the warm climate of Cambodia.”

“When Charles Clark’s wife passed away, he thought life without his beloved Mary would be unbearable. Charles knew that his middle-aged children, who had families of their own, didn't want him burdening them, which is why they dumped him into Fossdyke Old Folks’ Home. However, unbeknownst to Charles, this is not the end of his life story, but rather the beginning of a new chapter.

What started out as fun for the four elderly musicians of a band called Fossils, has now, thanks to Kipper, spiralled out of control. Record companies, fans, and the nation’s media scour the country in search of the elusive, young, vibrant, four-piece band, unaware they have a combined age of 280 years.

The old rockers, fearing their families being ridiculed when the truth comes out, need to find a way to avoid attention in the UK until things can be resolved.

Fortunately, Steve has a plan... Follow their antics as the band tours the Philippines, Cambodia, and Thailand as they attempt to stay one step ahead of their pursuers. They discover a new and carefree way of life, which they enjoy to its fullest.”

Fossils was a fun read and very informative about Southeast Asian history and landmarks. You can tell Robert A. Webster loves living in that area of the world. Each character is well defined and realistic. Getting to know the old men as well as the secondary characters was entertaining.

Steve Baker is known for causing disruptions at Fossdyke Old Folks’ Home. He is a thorn in Mrs. Chew’s, known as the warden or Chewy by the residents, side because his daughter owns the home. So his eccentricities must be tolerated to a point. Things liven up around the home when new resident, Charles Clark, moves in with his piano. Steve quickly introduces Charles to Wayne and Elvin. Wayne plays the drums, is mostly deaf, and also writes music. Elvin plays an old double bass with the assistance of his small falsies. He lost a couple of fingers in the Navy several years ago and has fashioned himself with fake finger extensions so he can continue to play his double bass. Steve plays an old Fender Stratocaster and loves playing old Rock and Roll. It’s his idea to start a band. The problem is Charles only knows classical music. When Wayne reveals he writes music, he and Charles sit down to adapt Wayne’s pieces into music for their band. So they start playing their original music at a small bar down the road for fun.

Kipper, a local DJ, records their music onto a disc and then submits it to a local contest. When things get out of control, Steve, being familiar with and longing to revisit the Philippines, decides the Fossils need to tour and hide out from British promoters there. Steve is happy to be back in his old stomping ground and hooks up with old friends in the area. The other men have a great time chasing women and partying all night long after playing a set at a local bar. Until one British journalist happens upon their trail in Cambodia. This imaginative story is a randy romp of debauchery and a unique read where you never know what is about to happen next.

I did come across a small number of proofing issues that included extra words, missing words, and wrong words.