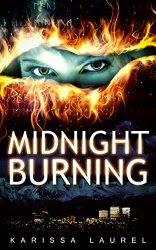 “Solina Mundy lives a quiet life, running the family bakery in her small North Carolina hometown. But one night, she suffers a vivid nightmare in which a wolfish beast is devouring her twin brother, who lives in Alaska. The next morning, police notify her that Mani is dead. Driven to learn the truth, Solina heads for the Land of the Midnight Sun. Once there, she begins to suspect Mani’s friends know more about his death than they’ve let on. Skyla, an ex-Marine, is the only one willing to help her.

As Solina and Skyla delve into the mystery surrounding Mani’s death, Solina is stunned to learn that her own life is tied to Mani’s friends, his death, and the fate of the entire world. If she can’t learn to control her newfound gifts and keep her friends safe, a long-lost dominion over mortals will rise again, and everything she knows will fall into darkness.”

This book did not take long to grab my attention. Steeped in Norse Mythology, wolves, and mystery, this was a no brainer for me. Solina Mundy considers herself a simple girl from North Carolina, however, she has always had prophetic dreams. Lately they have become terrifying as she continues to dream of her brother’s death in Alaska. Mani was attacked inside his apartment by a wolf. Solina intends to close out his affairs, apartment, and track down his murderers. The police really don’t have a clue, all they saw were the mundane facts of the case and they have exhausted any leads they had.

Mani’s employer, Aleksander Thorin, Mani’s best friend and Thorin’s business partner, Val Wotan, try to help Solina in her quest. However, she can tell the guys aren’t being completely honest with her. So Solina teams up with Skyla, Mani’s girlfriend and employee of Thorin Adventure Outfitters, and they quickly find themselves in over their heads. The wolf is now stalking Solina while Thorin, Val, and Skyla try to protect her.

Karissa Laurel does an excellent job of tying Norse Mythology into a modern setting with the living progeny of gods who were killed during the epic battle of Ragnarok. These descendants have become complacent in the status quo and have been drifting along for ages. One survivor of Ragnarok is in the process of shaking things up to take control and bring on another apocalypse. There is intrigue, mystery, romance, and danger for all concerned. The characters are diverse and well defined and all are flawed. These flaws are the main source of the twists in the plot that drove the story forward. I was totally drawn into the relationships between all the players: Thorin, Val, Solina, Skyla, the Valkyries, Baldur, the wolves, and Helen. This is an original story with unique characters from Norse Mythology that sucked me in, I blame author Lynne Cantwell for my obsession with Mythology right now.

This is a fascinating story that is well written, has entertaining dialogue, a fair amount of humor, and lots of tension. The ending caught me off guard with a huge twist. I can’t wait to read the sequel.

I found no instances where this could not be considered young adult appropriate.

I found no significant issues in proofing or formatting.