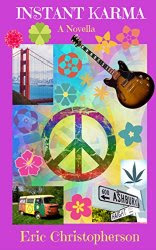 He was born in California, grew up in New England, and has since lived throughout the United States and a bit in Asia. He now lives in semi-rural Ohio with his wife, Seiko, and their toddlers, Keith and Annabel.”

“Former hippie Gordo McCain suffers a brain aneurysm in 2015 and awakens after surgery with retrograde amnesia. He can't remember a thing past the year 1969. He doesn't recognize his wife and family. He doesn't even recognize his own name because people aren't calling him Gordo McCain anymore but instead Robert Hurlbut. He discovers that he's been living under an assumed name for more than forty years and is now the last fugitive member of the radical underground group Stormfront.

At first he keeps his head low and continues living as Robert Hurlbut. But when it becomes clear that, over the years, he'd become a conformist and a 'sell-out,' Gordo is disgusted with himself. He trades his new Jaguar for a vintage VW bus, paints it in psychedelia, and hits the road to find an old lover, to find the truth about his allegedly violent past, and to find himself, existentially speaking. Along for the ride is his 15 year-old granddaughter, Emily Hurlbut, an alienated Goth and the only member of the family Gordo can relate to. Meanwhile, the FBI cold case unit picks up his trail.

First, the good. Instant Karma was funny, which was the goal. Imagine a 60s hippie suddenly waking up in today's world. If it is written reasonably well, how could it not be? For fans of music of the era, you'll find subtle references from the John Lennon inspired title to a Grateful Dead reference near the end, and plenty more in between. And while the character of Gordo is a bit cartoonish (not inappropriate for satire), he's a likeable guy and the plot has more than enough conflict for a novella-length story to keep me plenty interested in where it was going. I especially liked the relationship that developed between Gordo and his granddaughter, Emily, who could be viewed as her generation's equivalent to Gordo, in that she's a bit of a non-traditional non-conformist who likes to test limits.

Now the not-good-for-me. This goes strictly to personal taste and you may feel differently. Hopefully I'll get the terminology correct. The book is narrated in third person (a narrator who isn't a character, but sees all). This kind of narration is hard to pull off without errors, but the author dodged them here (or I missed them). It's also written in present tense. I'm not a fan of either of these, especially the second one. A double dose is worse. However, as I mentioned above, not everyone is going to react the same to this and both are valid writing styles.

One F-bomb. Other than that, nothing significant as far as language or adult situations.

Thanks for the review, Big Al!

On the novella's point of view, it's about 90 percent third person or told from Gordo's viewpoint, but there are some omniscient lines here and there (e.g., the first paragraph or three), the viewpoint of the unseen, all-knowing author. Now if I could just figure out how to be all-knowing outside of my books ...