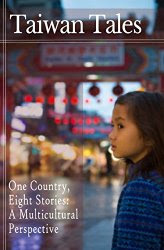 You’re sitting at a bar enjoying a baseball game on TV, when a stranger begins talking about a major leaguer who once played in Taiwan. You’d rather just watch, but he keeps talking and draws you in. The story takes a twist. You miss a double play. The guy says he’ll shut up, but he’s talking about a famous batter. You urge him to continue. He does and you learn how the player turned his career and his life around after a rainy night in Taiwan.

Roger Jergenson’s Flyout leads a collection of short stories told by expatriates in a land that is as far removed culturally as it is physically from their birth places. While the vignettes, from fantasy to noir, are written as insights into Taiwan’s multi-layered culture, they are as much about the universal human condition as they are about the differences.

Whoever compiled the anthology did well to start with Patrick Wayland’s baseball story. It is finely crafted and leaves the reader with a satisfying O. Henry ending.

In Gap Years, by Tony Messina, the male half of a cohabitating couple struggles against the claustrophobic malaise of a deteriorating relationship. He seeks solace through food, TV, and an affair as he looks into a future he can neither accept nor easily escape. The story is told with stark imagery that includes a chess game wherein the hero blunders into a trap and is check mated by his partner’s queen.

Superstition, by Amanda Miao, is a cautionary tale that unbelief is an inadequate shield against things unseen. The story is told with touches of humor and marred only by an abundance of modifiers. “… she quickly snatched an apple …” and later dropped it into her “large purse.” Things too often are not simply done. They are done “with a thud” or “with disapproval” when either it doesn’t matter or the context makes the “how” redundant.

The Collector, by J.J. Green, is a failed dystopian tale of society after global warming debased civilization. A shopkeeper sells photos of times before the Peak Heat and gadgets that people have forgotten how to use. He is taken by a policewoman and forced to work on a government project that uses “deep brain reading” to extract memories from the elderly. That exotic technology is in use, while the purpose of a tennis racket has been forgotten, apparently within the life span of surviving humans. Not only is the internal logic flawed, the tale ends with an event that owes solely to happenstance. A busy reader might skip this one.

In the Mood, by CK Hugo Chung, sneaks up on you like an unwanted stray kitten that quickly steals your heart. Military men in combat gear train in dragon-fire heat. Cut to a soldier on his bunk dreaming of cooling “the delicate face” of one he loves but fears to approach. Cut to that person, another soldier. The story focuses on the emotional tension of homosexual attraction in a macho society. For the most part, the writing is elegant, but would be much improved by a drill sergeant editor demanding rewrites of clichés, “I took it, all of it, with a grain of salt” and indulgences of excess, “The breeze was salty and sultry. The sun slow-cooked the air with a comfortable amount of heat and humidity.” Literacy here was sacrificed to alliteration, as sultry cannot reconcile with comfortable humidity.

Dragon’s Call, by L.L. Phelps, is a fun fantasy about a young woman who finds she can’t run far enough to take a break from her very special calling.

We’ll See Each Other on Facebook, by Edward Cheung, is a moderately engaging story of wasting time in a foreign land and reaching for elusive treasures of purpose and love. Unfortunately, quality of writing is also elusive in this story as only partially described below under Format/Typo Issues.

The reviewer is a 30-year resident of Japan and spent six months in Taiwan as a university student studying political science and Mandarin at Shida, during the fascist rule of Chiang Kai-shek.

We’ll See Each Other on Facebook was the only story with distracting use of nonstandard punctuation. “First week; in a hostel.” Semicolons have only two jobs. This one fits neither. Lots of parentheses, presumably not intended to break the flow of the story, but do so regardless. Dashes are sometimes -- and other times –. Compound adjectives are used so enthusiastically they appear to be a fetish, even to the point of misspelling as in “inter-country clusters.” Ellipses are assigned with disregard for their common role in English: “Today is my last day in Taipei, and they are the last things I see before leaving this world... this moment in time.” What words were omitted? There is haphazard use of italics and on and … .