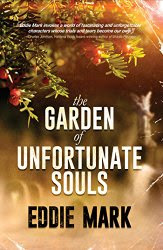 “Eddie Mark is a writer, researcher, educator, and former city chess champion of Buffalo, New York. His prize-winning short stories have appeared in the Hart House Review and the anthology Bloodlines: Tales from the African Diaspora. The Garden of Unfortunate Souls is his first published novel.”

“In 1980s Buffalo, New York, the recession has transformed the city's proudest African American neighborhood into a ghetto. Loretta Ford, an eccentric single mother and religious fanatic, survives for years by masquerading as the owner of a dead woman's house. Her reclusive life is interrupted when an unlikely incident brings the mayor of Buffalo to her home in the middle of the night. Their secret meeting sets off a chain of events that will leave two families altered forever.”

The story of abuse, betrayal and violence is told with a poetically powerful voice that renders its characters as vivid as “Mac” McMurphy and "Chief" Bromden in Ken Kesey’s Cuckoo’s Nest. The Buffalo mayor’s family is brought down because of neglect of an apparently dyslectic and intellectually challenged child, who hides abuse by a teacher out of fear of disappointing his father. He seeks revenge in the only ways he can and brings destruction. A car accident connects the family to a mother who uses religious fervor to cover her own sins, and beats her son in revenge for betrayals by past lovers. The boy creates his own reality and uses it to escape not only the ghetto, but his mother’s ghost.

Eddie Mark’s debut novel should be required reading for any culture that embraces “spare the rod, spoil the child.”