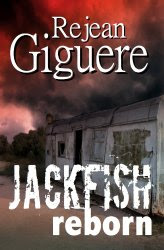 Rejean Giguere is an avid outdoorsman, adventurer, photographer and artist. He enjoys fishing, hockey, golf, tennis, skiing and snowmobiling, his V-Max motorcycle and vintage Corvette. He grew up in Canada and Europe, and enjoyed a business career in Toronto and Ottawa.

A young Chinese Triad leader, Dragon Chang, travels to the small Canadian town of Jackfish to solve a riddle written on a scrap of paper and left to him by his great grandfather. He believes the riddle points to great wealth.


I enjoyed this fast paced, action-packed read. The story is woven of three distinct threads.


The first few chapters give backstory that explains how the treasure came to be in Jackfish. I’m not much of a ‘back story’ kinda guy, but I thoroughly enjoyed reading how Dragon’s great grandpa marshalled the Chinese workers as they built the railroad that skirted the banks of Lake Superior.

The plot is often driven by misunderstandings and this is nicely conveyed by the way the author switches between the threads giving different viewpoints of the same events. For example, when the Chinese arrive in Phil Hardy’s vicinity, he assumes they’re here to take revenge on him. The Chinese assume he’s after the treasure. April gets involved just because she wants to know why these strangers are in her district, and even to the end has no inkling about the treasure, or who the gangsters really are.

A number of interesting side stories involving cougars, bears, and drunks mesh the plot together and add to the richness. The writing is sharp, but it could benefit from an editor. Not for proofing, but just to straighten out some minor point of view slips that kicked me out of the story on occasions.

This is the second Rejean Giguere novel I’ve read from Al’s list, and it’s totally different from the first—kudos, Mr. Giguere. Keep us guessing.

Too few to mention. Canadian spelling.