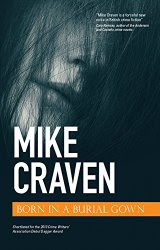 Mike Craven is a native Cumbrian where all his writing is set. His sixteen years in the probation service form a foundation for his work.

Detective Inspector Avison Fluke is a man on the edge. He has committed a crime to get back to work, concealed a debilitating illness, and is about to be made homeless. Just as he thinks things can't get any worse, the body of a young woman is found buried on a wet, Cumbrian building site. Shot once in the back of the head, execution style, it is a cold, calculated murder.

When the post-mortem reveals she has gone to significant expense in disguising her appearance, and the only clue to her identity is a strange series of numbers, Fluke knows this is no ordinary murder. With the help of a psychotic ex-Para, a gangland leader, and a woman more interested in maggots than people, Fluke must find out who she was and why she was murdered before he can even think about finding her killer.

As the body count rises and his investigation takes him from poverty stricken estates to picture perfect Lake District villages, he realizes his troubles are only just beginning. Because someone, somewhere has a plan and if Fluke can't figure out what's happening, he may just be next…

Born In A Burial Gown was longlisted for the CWA Debut Dagger Award and it’s easy to see why. This is a consummate police procedural and for several very good reasons. First is the significant depth of detail into investigative processes rarely seen elsewhere. If you’re into the whys and wherefores, Burial Gown has it, although Craven manages not to bog the reader down in detail.

Second is the characterization, Fluke in particular is great. Suitably damaged, suitably driven he pushes the already fast-paced story along in his own way.

Third is the setting. Cumbria (aka The Lake District) is a beautiful (albeit wet) area in the North West of England more known for its tourist attractions than criminal fraternity. Craven offsets the two beautifully.

Finally there’s the plot itself. The woman’s murder and the mystery that ensues is compelling and Craven reveals just enough to keep pulling the reader through to the very satisfying end.

Nothing major for a crime novel.

Nothing worth a mention.