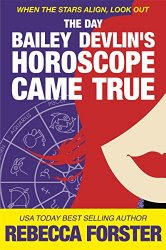 USA Today best selling author Rebecca Forster’s twenty-something books mostly fit within the broad mystery genre, some in the legal thriller subgenre and others harder to classify. Forster is a two-time winner in the Books and Pals Readers’ Choice Awards, with Before Her Eyes topping the mystery category in 2013 and Eyewitness (book 5 of the Witness Series) getting the nod from our readers in 2014.

“Oh, boy! Oh, Bailey! What are you going to do when Fate decides to have a little fun?

Bailey Devlin is convinced the stork was drunk the day he dropped her in her mother's lap. Mom is blond and beautiful; Bailey redheaded and gawky. Mom's heart longs for her missing-in-action husband; Bailey's for a man she can count on. Now mom is off looking for her one true love, while Bailey is about to realize her dream and become a lawyer. Yet, as the bar exam looms, there is mischief afoot in the heavens. According to her horoscope, the man who will change her life is coming to her door. The man who shows up isn't even close to one she has dreamed of, but Bailey is about to find out the hard way that he is the man she needs.”

Since getting my first ereader my reading diet has changed, weighted heavily to indie authors. In the past, I would grab John Grisham's latest in hardback as soon as it was released. Now he has three (or is it four) books out that I haven't even bought, let alone read. My must-read author list is now longer and much different. One of the few authors I'd read prior to getting that first ereader who made it onto my current must-read list is Rebecca Forster. Part of the reason is I (maybe obviously) like thrillers (especially the legal thriller subgenre) and suspense, which is her forte. Another is that her recent books stretch their genre in ways I've enjoyed. But I wasn't sure what to expect from her latest book, a romantic comedy.

This first installment in the Bailey Devlin trilogy introduces us to the character of Bailey. She barely knew her father, who disappeared while she was young, but her hippie-ish mom is convinced he'll be back some day. Growing up in a home where survival was a struggle, Bailey figured out that if her life was going to be different, it was up to her to make it so. She's fun. She's different. And she's determined. This focus on success is working, as Bailey is just weeks away from taking the bar exam. For the first time she'll be able to make a living wage. Maybe she'll even feel like slacking off enough to allow a little time for romance in her life. (Assuming anyone is even interested.) That's when the unexpected happens, with two potential romantic interests and some additional responsibility she didn't expect, nor want, upset her best-laid plans.

This was a fun (and funny) read. I'm eager to read the next in the series to find out where Bailey goes from here.

This is the first of a series that will have three books with plans for the subsequent installments to be released rapidly.