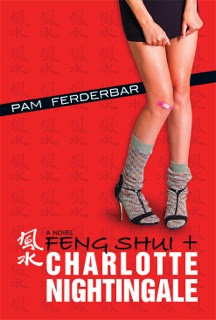 Growing up in Wisconsin, Pam Ferderbar worked at the “family advertising photography business where she honed her skills as a TV commercials director, and was paid to play with imaginary friends called actors.” After college she moved to Los Angeles and continued directing commercials as well as adding screenwriting to her activities. An earlier, novella-length version of Feng Shui & Charlotte Nightingale sparked a bidding war for the movie rights, only to have the deal fall apart when the executives in charge of the project were fired a few months later.

Pam has now returned to her roots, living in Wisconsin, working with her father and writing her next novels.

“Charlotte Nightingale has the worst luck in the world. Every day is a bad hair day. Her boyfriend’s a snake, her job blows, and her own family seems to hate her.

For over 4,000 years the Chinese have practiced the ancient art of Feng Shui, a complex body of knowledge that reveals how to balance the energies of any given space to assure health, love and good fortune for people inhabiting it. The Chinese never met Charlotte Nightingale.

A handsome Chinese food deliveryman/Feng Shui master takes pity on Charlotte and breaks out every tool in his Feng Shui arsenal to bring her some modicum of happiness. It rocks her world all right. Charlotte’s life goes from bad to worse.

When everything comes crashing down and run-of-the-mill catastrophes pale in comparison to recent events, Charlotte unwittingly embarks on a great adventure during which she finds romance, a new wardrobe, bags of money and most importantly, herself.”

What a fun read.

Charlotte has one kind of luck. The bad kind. She has a dead-end job at a slimy car dealership, lives in an apartment where everything is falling apart, and has a leech for a boyfriend. She dreams of being able to afford to go back to school to become a librarian. In contrast, her sister Charlene is a fashionista who has all the good luck including good looks and a rich doctor as her new fiance. (Her goals appear to be limited to looking good and marrying well.)

What made this story so fun, beyond Charlotte being a character I found easy to root for, was the humor. There was something different about it, but I had a hard time putting my finger on exactly what. I almost described it as subtle slapstick. But that's wrong. The definition Wikipedia gives for slapstick is that it “is a style of humor involving exaggerated physical activity which exceeds the boundaries of common sense.” The humor here is slightly exaggerated, at times, and might sneak past the boundaries of common sense occasionally. But I wouldn't call it physical. (Okay, maybe it was even that at times, at least as much as a book can be.)

I finally came to the conclusion that what was different is how visual it was. I rarely read a book where I picture many scenes unfolding in exquisite detail like I did here. At times, it felt like watching a movie as the scene unfolded in my mind. Given the author's history working in visual media, both photography and TV commercials, my theory even seems to make sense. Give it a read and let me know if you agree.

A small amount of adult language and some mild adult situations.

I love a good romantic comedy! This looks like fun.