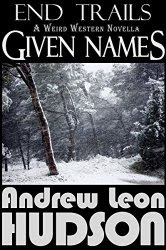 “Andrew Leon Hudson is an unapologetic genre author from England. In preparation for life as a writer he has worked in fields as diverse as prosthetic make-up, teaching, contact lens retail, "intoxicant delivery" and the services (customer and military). He used to have his own company, but it died. His first novel was published in 2014 to silent acclaim only to vanish from existence nine months later, so in 2015 he's doing all that sort of thing for himself. An ‘unapologetic genre author’, he is currently writing End Trails, a series of weird western stories, and Dark Matters, which presents themed pairs of apocalyptic and post-apocalyptic science fiction, and horror stories with an edge of black humour…”

“Travel the End Trails - paths into hidden places, taking you towards the unknown and from which return is far from certain. Tales of things not believed from the comfort and safety of civilisation and only whispered about on the distant fringes of exploration, all waiting in the wilderness.

In Given Names, a Native American boy comes of age only to have the future he imagined snatched horribly away, leaving only doubt. No-one knows to what destination the path through life will lead - but one thing is for sure: you won't be the same person when you get there...”

This novella is a well written account, from a young boy’s point-of-view, of his life as a member of his tribal community. No mention of his parents is ever given, so I assumed he was an orphan adopted by the whole tribe. His name is Circling Bird, which could be construed a few different ways, since we don’t really know him yet I assume it refers to a hawk or eagle. He and three of his friends have been chosen to follow along on their first hunt. They are excited, they have been training for this experience. No one expects the tragedy that befalls them.

The story is Circling Birds healing journey, he has been renamed Three Spirits. He is taken under the wing of Wide Sky, the village shaman who has lost his son. As Three Spirits regains his strength he undergoes a process of selfdiscovery as he learns the healing arts from Wide Sky. As time passes, Three Spirits feels the need to confront his past and he separates himself from the tribe to head back to where he once called home alone. Prairie Wind follows and guides him in weapon use for hunting and further lessons in tracking. Until the early morning, when Three Spirits feels he must continue his journey alone.

The twist at the end of the story is shocking and totally unexpected. Whether it is believable or not depends on your own perspective and willingness to believe in the outcome. It is certainly grievous on several levels.

The author uses British spelling conventions. Given Names is Book 2 in the End Trails series and can be read as a stand alone. “The End Trails are stories to be told around the camp-fire, dark things to unsettle the mind, before you settle down to sleep.”

I found no issues with editing or formatting.