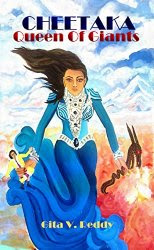 Born and raised in India, Gita V. Reddy earned a Master’s degree in Mathematics from Hyderabad University in 1985. She worked for the State Bank of Hyderabad as a Probationary Officer for 26 years. In 2011 she retired and pursued a career as an author. Reddy writes for middle-grade readers and some of her books include Cinderella’s Escape and The Missing Girl.

Nine-year-old Tara is a poor little rich girl ignored by her parents. Her father is a rich industrialist and her mother a generous philanthropist. When Tara’s birthday nears, all she wants is to spend quality alone time with her mom and dad, so she chooses a cruise as her birthday gift. She figures that way her parents will be far away from their minions and phones. Unfortunately for Tara, her folks bring their work with them. So when a storm rocks her ship, Tara is in hiding in hopes of teaching her family a lesson. However, fate has other plans, and Tara is jettisoned alone in a lifeboat that ends up on the shores of Giant Land.

In Giant Land Tara meets people that look similar to humans, but they dwarf us in size. She is no bigger than a thumb. The cast of characters, to name a few, includes Cheetaka, Queen of the Purple Mountains Land, her seven year-old son, Montek, Aaloma, a wise and aged giant, and Mamahak, an evil magician.

The basic plot is about Tara’s adventures with best friend Montek and Giant Land’s infiltration of evil by the hapless King Druaka and his son, Trimo, who uses evil magic in an attempt to conquer the world. Naturally, everything leads to Tara’s final quest to return to her home world.

On her website, Gita V. Reddy claims her target audience are children from 8-14. With that in mind, Reddy keeps her sentences short and simple, a huge plus for reluctant readers. However, her novel, Cheetaka, Queen of the Giants, is 214-pages long. Too often the author goes off on tangents that don’t really push the plot forward. Though she has written an action packed book some middle school children would love, I felt there was too much gratuitous violence.

It was obvious that Cheetaka was self-published. A good editor would have cut out unnecessary scenes and rambling narration. Also, books for children are about children. They have a problem and they work out that problem with other children. Adults are just props that give little or no feedback. In Cheetaka, Tara feels more like a secondary character overwhelmed by the wise Queen of the Giants who solves most of her problems for her.

A good writer shows her audience the plot as it develops. Though Reddy did this to some extent, she resorted to meandering narration rather than focused dialogue and scene descriptions. Too often I had to go back and re-read the scene to figure out where it took place, and frequently could not find the answer to my search.