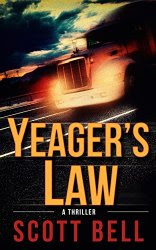 Availability
Kindle US: YES UK: YES Nook: NO  Smashwords: NO  Paper: YES
Click on a YES above to go to appropriate page in Amazon, Barnes & Noble, or Smashwords store

“Scott Bell has over 25 years of experience protecting the assets of retail companies. He holds a degree in Criminal Justice from North Texas State University. With the kids grown and time on his hands, Scott turned back to his first love—writing. His short stories have been published in The Western Online, Cast of Wonders, and in the anthology, Desolation. When he’s not writing, Scott is on the eternal quest to answer the question: What would John Wayne do?”

“Abel Yeager is dead broke, down on his luck, and suffering from a serious case of what-the-hell-does-it-matter. His transition from active Marine to stateside long-haul trucker hit a wicked speed bump when his rig was involved in a wreck that claimed the life of a pregnant woman and laid him up for several months.

Back at work but deeply in debt, Yeager meets bookstore owner Charlie Buchanan in St. Louis and jumps at the chance to haul a load of remainder books to Austin for her. On the way south, a crew of truck thieves tracks his every move. But none of them know what Charlie’s ex has smuggled inside the book pallets, who he stole it from, or how far the owner will go to get it back. Charlie’s the first person Yeager has cared about in a long time, but as their bond deepens, so does the danger they’re in.

With enemy forces closing in, Yeager battles greed, corruption, and his own fatalism in a bid to hold true to Yeager’s First Law: come home at the end of the day.”

This was a fun, fast-paced read, as you want from a thriller. It also has a budding romance for an occasional change of pace and the main characters, Abel and Charlie, are easy to care about. Even the minor characters add to the story. Abel's ex-brother-in-law and long-time friend, Victor, not only adds to the story, but provides a bit of comic relief, as does Victor's side-kick, known as Cujo. However, it wouldn't be a thriller if there wasn't an antagonist or two shaking things up for the good guys. Yeager's Law has plenty of those, too. Maybe even bordering on too many.

Which is as good of a segue as any into my concerns. All fiction requires suspension of disbelief to some degree. Things that we've learned to take on faith in fiction, we'd never believe if told they happened in real life. The thriller genre requires more of the reader in this regard than most other genres happening in the real world and contemporary times, so if you read a lot in the genre, as I do, you've learned to turn off your no-way-in-heck alarm while reading. Yeager's Law pushed me to the point where I was teetering on the brink of a full scale no-way attack, but I managed to avoid it. Barely.

There were two reasons my ability to suspend disbelief was stretched almost to the breaking point. One is too many coincidences. The other is too many groups of bad guys. I can't even begin to explain without giving away too much. If you're prone to saying, “bull-pucky, no way that could happen,” this might be too much for you. Experienced thriller readers will probably be okay.