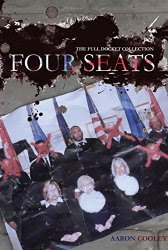 Aaron Cooley is a screenwriter and movie producer who works with the well known director Joel Schumacher as well as a novelist with one other work, Shaken, Not Stirred, available. A native of Portland, Oregon, the Ivy League graduate now lives in Los Angeles.

“Each year on the first Monday of October, the Supreme Court reconvenes for another new term. But this year, the first Monday brings only terror and tragedy, as six bombs tear through their temple of law, killing 124 people.

Homeland Security immediately brands Supreme Court Police officer Jason Lancaster as their prime suspect. Jason must go on the run to find the persons responsible for the attack – and for the murder of his fiancée, Supreme Court Marshal Miranda Whitney.

Meanwhile, former First Lady Rosemarie Irving volunteers to assist the current President in nominating replacements for the four Justices lost in the tragedy. Their confirmation hearings will become contentious battles over some of the most polarizing legal issues of our day: from abortion to marijuana, from homosexuality to equality for women.

The quest for the truth will eventually lead Jason Lancaster back to the White House, and into a face-to-face confrontation with the person he believes must have planned the bombings: the newly-appointed Chief Justice of the Court. “

For those who are into such things, Cooley has taken advantage of his movie business connections to produce a trailer for Four Seats starring actorPatrick Wilson.

I've never heard the genre of a book described as epic political thriller. I'm adding that term to my lexicon now, because it is surely an accurate description of Four Seats. Epic in the sense of being long, two or three times the length of a typical thriller, but also in the sense of covering a lot of ground. Cooley has released the book as six bite size novellas as well as the complete series as one volume.

I hate cliffhangers and had I been reading this as a serial having to wait for the next installment after being left hanging, I wouldn't have been happy. However, when read as one (long) book, this actually worked out well. With the book structured in six parts, it kept the pace fast and the tension mounting, not only in the short term, but also the long. I knew it was taking me a long time to read, but it never felt like it was bogging down.

The story itself is wide ranging, with several different story threads that are all intertwined, another factor in keeping things fresh. At different times it read and felt like a political thriller, a legal thriller, and even a bit of a dystopian thriller. All of those thriller subgenres appeal to me. If they do to you as well, this is a book you should like.

Adult language and some adult situations.

My review is based on an advance reader's copy, so I can't gauge the final product in this area.