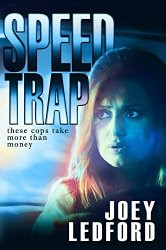 “Joey Ledford began writing at age 15, signing on with his hometown weekly newspaper to cover high school sports. He graduated from the University of Tennessee, where he edited the daily student newspaper and was the top journalism graduate. From there, he did stints with United Press International and the Atlanta-Journal Constitution, covering stories as varied as the death of Elvis Presley, the retirement of Bear Bryant and the congressional creation of a new federal holiday to honor civil rights icon Martin Luther King. He is married and the father of two grown children.”

“Speed Trap is one good cop versus a whole town of bad cops.

Speed Trap is set in 1959 in a small south Georgia town, a place you can't avoid on your long road trip to Florida, and you'd better hope you only get a ticket when you get pulled over.

I enjoyed Speed Trap, in spite of what I realized were a bunch of clichés at the heart of the story. It has the corrupt villain who pulls all the strings in a small southern town and, of course, everyone calls him “Boss.” (Think “Boss” Hogg from the Dukes of Hazard TV show for one example.) We've got the hooker with the heart of gold. (She's named Fancy. Isn't that from a Reba McEntire song? In fact Ledford's Fancy has a lot in common with McEntire's Fancy.) Even the concept of a small burb on a busy highway that fills the revenue side of the town's budget largely through the issuance of speeding tickets is a cliché, albeit much more rooted in truth than the others.

That's the thing about clichés in stories. They become that because they've worked in the past to the point of becoming overused. Some of the best, like the happily-ever-after ending in romance novels, become solidified as rules. Needless to say, when the governor sends our protagonist hero, Cal Bocock, in to collect the evidence to shut down the wrongdoers, I knew he'd get the job done. Yet I still wanted to go along for the ride.

A small number of proofing and copy-editing misses.